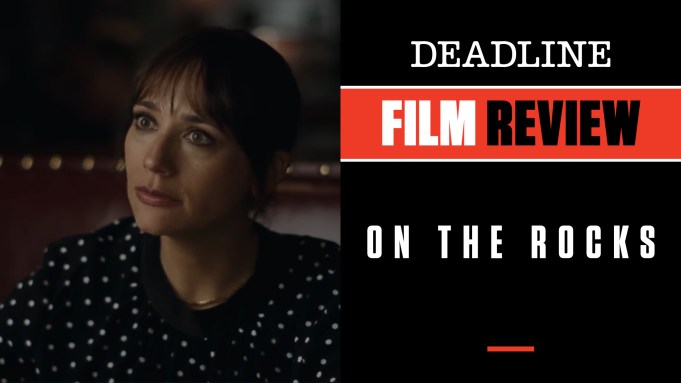 The New York Film Festival may have opened last week with the first part of Steve McQueen’s new series of films for Amazon, but with tonight’s world premiere of Sofia Coppola’s dazzling new comedy On the Rocks, it feels like the fest really has something to shout about.

Maybe it has been because 2020 is such a miserable year, or maybe because the world is just in a state of upheaval over COVID-19, or maybe it is just because we need some laughs. But On the Rocks is more than just a riotously funny, wonderfully witty and smart film — it is a much needed one. Coppola’s movie is also a bit of a pre-pandemic valentine to New York City, a reminder of the Big Apple’s pure joy, and even without Bill Murray to light it up that would probably be enough. The fact that the writer-director-producer was able to entice Murray to work with her again in a major film is not a mystery: He received a Best Actor Oscar nomination the last time in 2003’s brilliant Lost In Translation, for which Coppola won Best Original Screenplay. If the Academy can get over its prejudice against comic performances, history could be repeating itself. This also happens to be Coppola’s lightest, and perhaps most crowd-pleasing effort, and boy do we need it now.

The title On the Rocks may refer to what Laura (Rashida Jones) is beginning to think about the state of her marriage to Dean (Marlon Wayans, in a nice change of pace) when she suspects he is spending way too much time with a female work colleague. Circumstantial evidence rears its ugly head, but could it just be in her mind? Enter playboy dad and livewire force-of-life Felix (Murray), arriving for a visit and not a moment too soon. Although the father (and grandfather to her two girls) and daughter are often on opposite sides of the equation, and she has a fair bit of cynicism about the way he handles his own affairs, they soon become a detective team at his urging when he gets wind of her suspicions about Dean. Felix comes down definitively on the side of pinning the hubby as a philanderer, though the proof may not be in the pudding. Thus the two newly formed sleuths set out on the town in a gorgeously filmed New York City (Phillipe Le Sourd was cinematographer) as they experience one antic-filled escapade after another in search of the truth.

Once Murray gets behind the wheel of his flashy red sportscar all bets are off. Laura, skeptical as she is of her charming but off-the-charts dad, starts to get with the program in a big way, even buying into Felix’s plan to stalk Dean on a trip to Mexico where a company retreat is taking place. This all becomes the stuff of screwball comedy at its Golden Age best, and in fact Coppola actually cites such movie inspirations as the 1930s Thin Man series in which William Powell and Myrna Loy pop off the screen with witty, rat-a-tat dialogue. Not a director prone to lots of words in her scripts, Coppola lets loose here with a sophisticated screenplay full of them in sparkling runs of conversation between father and daughter, he full of exuberance and wacky ideas, she more down to earth and, like so many contemporaries, perhaps on a different planet than her parent. On the Rocks shows us the chasm we have with our folks, the different way we think, but the familial connection that is unmistakable. This film is a blast.

Murray should just keep working with Coppola because she has now given him the two best roles he has ever had in movies, this one miles apart from what he did in Lost In Translation but no less impressive. Coppola clearly knows the rhythms that make him such an effective comic performer, but also when to put in the warmth and the recognizable human being. Murray runs with it playing the kind of guy from the Martini generation, a man instantly familiar to all the maitre d’s in New York’s finest. It is a completely original character for Murray and he nails it. Coppola had directed Murray and Jones together in the Netflix special A Very Murray Christmas and evidently discovered real chemistry because they have it in spades here, completely believable as a father and daughter, definitely apart but still with unquestionable ties that bind and, yes, frustrate. That’s especially so for Jones’ Laura, who is basically playing the straight man but also will be instantly relatable and sympathetic to women seeing themselves in some of her predicament. She is terrific here. For Wayans, this is all a departure from his broader comedies and it proves an inspired casting.

Producers are Youree Henley and Coppola. The film, which is part of the partnership between A24 Films and Apple, will launch in theaters October 23 and later on the streamer. It is a winner, a complete delight in every sense of the word. Things are looking up.

Check out my video review above with scenes from the film. Do you plan to see On the Rocks? Let us know what you think.