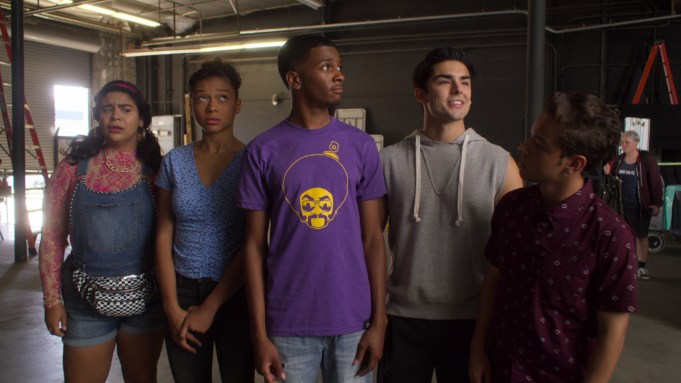 “When are we ever just gonna get to be teenagers?”

Netflix has released the first trailer for the third season of its coming-of-age comedy On My Block, which premieres March 11. Check out the video above and the new key art below.

The trailer opens with South Central L.A. teens Jason, Sierra, Diego and Brett coming face-to-dehooded face with Cuchillos, head of the Santos gang. Perched on a wicker throne, she assures the quartet that they needn’t fear her — she’s brought the kids there to thank them “for helping to take down the Prophets.” Oh, and there’s one other thing: It seems that Lil’ Ricky is alive — “and you’re gonna find him,” she says.

Deciding that they need “unconventional protection,” the pals find it in Jasmine (Jessica Marie Garcia), who put together a fabulous “crime board” but wants to practice her frisking skills first.

Created by Lauren Iungerich and Eddie Gonzalez & Jeremy Haft, On My Block follow the four bright and street-savvy friends navigating their way through the triumph, pain and the newness of high school in the rough inner city. Diego Tinoco, Sierra Capri, Jason Genao, Brett Gray star along with Garcia and Julio Macias; the latter was upped to series regular in August.

Showrunner Iungerich, Gonzalez and Haft executive produce On My Block, which won the 2018 Teen Choice Award for  Breakout TV Show.