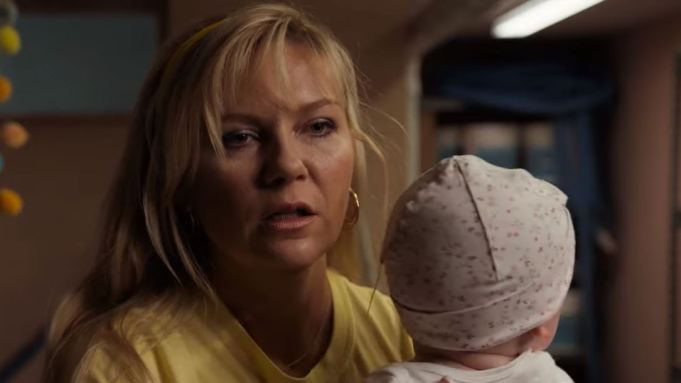 Wanna live “the A-list, six-star, jet set lifestyle that everyone wants”? Easy — just “look at where you are and think about what you wanna be.”

Here’s the first trailer for On Becoming a God in Central Florida, Showtime’s dark comedy series starring Kirsten Dunst about the cult of free enterprise and one woman’s relentless pursuit of the American Dream. Created and executive produced by Robert Funke and Matt Lutsky, the project originally was ordered straight to series by YouTube a year ago, and Showtime picked it up in turnaround last month.

Here’s the logline: Krystal Stubbs (Dunst) is a minimum-wage water park employee who lies, schemes and cons her way up the ranks of Founders American Merchandise (FAM) — the cultish, flag-waving, multibillion-dollar pyramid scheme run by the powerful Obie Garbeau II (Ted Levine) that drove her to ruin in the first place. Determined to make a better life for herself, Krystal dives deep into FAM and develops a tangled relationship with its most loyal and fanatical follower Cody (Théodore Pellerin), until her business begins to affect those closest to her, including Ernie (Mel Rodriguez), her affable water park boss, and his FAM-skeptic wife Bets (Beth Ditto).

On Becoming a God in Central Florida premieres at 10 p.m. Sunday, August 25. It is produced by Sony’s TriStar Television, with Smokehouse Pictures’ George Clooney and Grant Heslov serving as executive producers alongside Dunst; Charlie McDowell, who also directed the pilot; and Esta Spalding, who also serves as showrunner; and Sarah Shepard. Watch the trailer above — be wary of some NSFW audio — and the key art below, and tell us what you think.