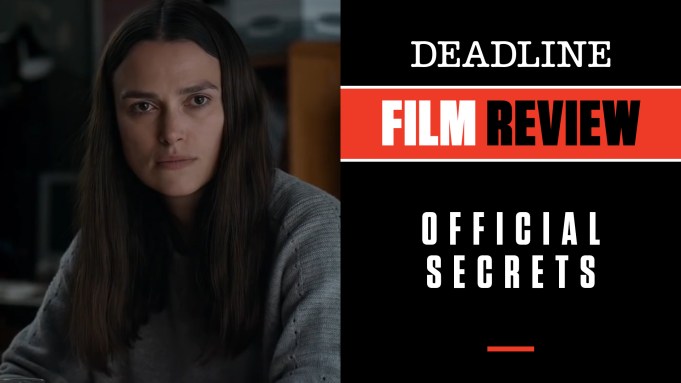 The most gripping thriller of 2019 is here. It’s official. This one will have you talking – and it should. Official Secrets is a pulse-pounding true drama about the rarest of government workers these days: someone who actually has a conscience.

Set in the post-9/11 era — early 2003, to be exact — the story concerns Katharine Gun Keira Knightley), a British spy who works in intelligence and comes upon an email which suggests the U.S. and UK governments plan on blackmailing members of the United Nations in order to get them to vote yes for a war resolution in order to stop what they suspect is Saddam Hussein’s buildup of weapons of mass destruction. Gun becomes a whistleblower, leaking the email to Martin Bright (Matt Smith), a reporter for the Observer, who becomes the first journalist to write about this illegal act. Before long Gun appears to be in over her head and knee deep in legal trouble as she admits she did this.

That is the basic premise of this riveting movie from Oscar winning director Gavin Hood (Tsotsi, Eye in the Sky), a helmer who often delves into questionable activities on the part of various governments. Joined on the screenplay by Sara Bernstein and Gregory Bernstein (based on the book The Spy Who Tried to Stop a War: Katharine Gun and the Secret Plot to Sanction the Iraq Invasion), he presents a simple story of one person doing the right thing, against all odds and in personal peril. It is almost a fantasy concept in the Trump era.

Then-President George W. Bush and British Prime Minister Tony Blair did enter into the Iraq War just three months later, so this act of courage did nothing to change the trajectory of what became a false premise in starting the war. This movie, though, is not telling the story of a triumph in stopping an unfortunate war but rather the power of one person’s conscience in trying to make a difference. Apparently the reason the U.S. and Britain wanted the UN vote (which never took place) was to put some shadow over their own activities in this regard. Gun tried to stop it, and that is admirable in its own right.

If it sounds a little dry as cinematic material, think again. Hood has a knack, like Hitchcock, for making such premises into white-knuckle thrillers and — like he did in Eye in the Sky — he has done again here, aided by a terrific cast led by a never-better Knightley in the key role of Gun. Smith is equally excellent as a journalist with a risky story, as is Rhys Ifans as one of his colleagues. Adam Bakri is excellent as Gun’s husband, and Ralph Fiennes is perfect casting as Gun’s lawyer, delivering another in a long line of memorable performances.

Producers are Ged Doherty, Elizabeth Fowler and Melissa Shiyu Zuo. IFC Films releases it Friday. Check out my video review at the link above with scenes from the film.

Do you plan to see Official Secrets? Let us know what you think.