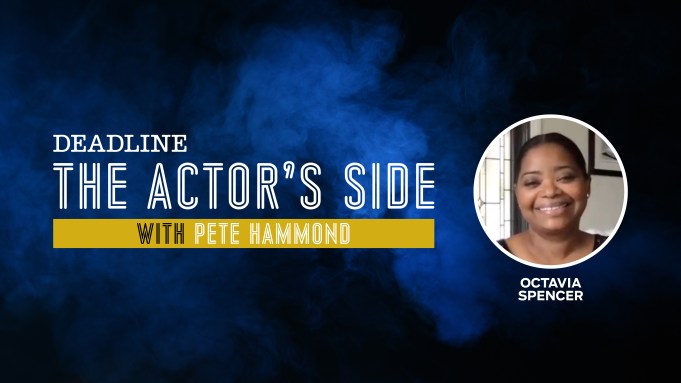 Octavia Spencer starts out our conversation for this week’s episode of my Deadline video series The Actor’s Side by joking about how some of the parts she has played in the past few years seem to have something in common. Spencer says in The Help she was a maid, then in Hidden Figures she worked at NASA, and then in The Shape of Water she was a maid who worked at a place like NASA.

The other thing that ties all those roles together, other than the fact they were all set in the ’60s: they were in movies all Oscar nominated for Best Picture, and she was nominated for Best Supporting Actress for all three and in fact won for The Help. Throw in another ’60s-set Oscar Best Picture winner — Green Book, on which she was an executive producer — and this is a pretty remarkable turn of events for an actor who wasn’t even an actor when she started out in this business, but rather worked on sets behind the scenes.

We talk about how she made that transition when she finally got up the nerve to ask director Joel Schumacher if she could play a role in A Time to Kill , the movie she was working on as an assistant. She got the part of a nurse and estimates she has since played about 32 other nurses, a movie profession that perhaps sets her up nicely to deal with a pandemic (she answers that by pointing out a certain skill she learned if anyone is interested in bringing her onto the front lines right now).

She’s actually busy, despite this unusual period where she and the industry have had to put everything on pause. This Emmy season she is represented by two big projects for streamers in which she not only stars but also is an executive producer. For Netflix she is starring in the limited series Self Made: Inspired By the Life of Madam C.J. Walker, playing the entrepreneur of a massive hair care empire that made her the first female millionaire businesswoman. She also is in a regular drama series, Truth Be Told, one of the first projects for Apple TV+,  in which she plays the true life crime-solving podcaster Poppy Parnell.

Spencer is especially happy to be doing both projects for TV, one because Madam C.J. Walker was such an inspiration to her when she was growing up, and the other because she is obsessed with crime-solving mysteries like Columbo and couldn’t wait to get her own trench coat on as it were for Truth Be Told.