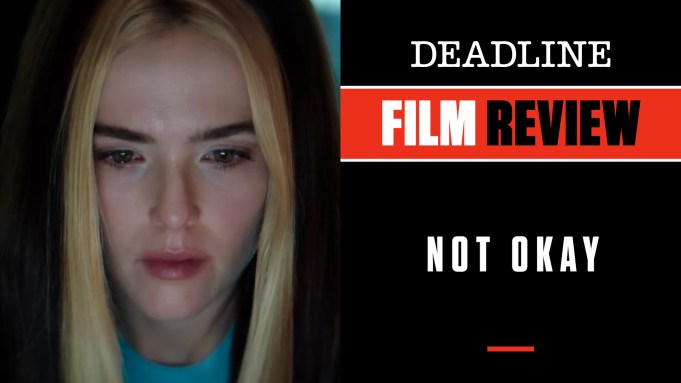 Searchlight’s Not Okay is actually quite OK, a clever satire on the effects of instant social media fame that is more like a house built of sand just waiting to collapse. The timing is definitely right for this millennial-flavored comedy, which adds up the costs of getting what you wish for.

Danni Sanders (Zoey Deutch) is an aspiring writer and lowly photo editor for one of the many websites out there with ambitions to be hip and happening — you know, the kind of place where gaining a social media footprint is everything. Danni herself is a bit of a trainwreck whose great regret in life was being stuck on a cruise when 9/11 happened, thus missing all the action. She is indeed a piece of work who lives a somewhat isolated existence with her pet guinea pig Weasely. She is a bit too infatuated with a colleague, Colin (a hilarious Dylan O’Brien), who is tattooed in all the right places and totally obsessed with his own rather fake online presence. She thinks if she could impress him enough, they might hook up.

Innocently enough, and using her photo skills, she puts out a fake Instagram story with Photoshopped pictures showing a purported trip to Paris she is on after being invited to a cool writers conference there. None of it is real, but the whole thing blows up in her face when a tragic terrorist attack hits all over the City of Lights. Suddenly her parents, work colleagues and everyone who knows her frantically try to contact her to see if she is safe. Of course she is. She never left home, but now Danni is freaking out, so she gets in deeper. A lot deeper. By continuing the big lie, she suddenly becomes a “survivor” and as the, uh, hits keep on coming, she becomes an actual influencer, a new star at her website and someone being pursued for interviews, as well as getting noticed by Colin.

Instead of pulling back, she forges ahead, even joining a survivors workshop where she meets an actual survivor of tragedy named Rowan Alden (Mia Isaac), a very intense young woman whose sister was killed in a school shooting and who has turned into a major anti-gun activist who utters phrases like “This Is not OK”, a line later employed by Danni, who becomes associated with it, even as she gets closer to Rowan and even joins her speaking at rallies. Trouble brews, though, when a jealous and suspicious co-worker and writer at the website (Nadia Alexander) finds her way into Danni’s laptop and sees the whole thing for what it really is — a big lie. Things get very complicated from there, but the film from writer-director Quinn Shephard never veers off course, even if playing true human tragedy as fodder for satire could be cringe-inducing in the wrong hands. This never goes for the cheap laugh but does prove that Shephard is a sharp observer of human foibles and the price of instant fame on the net.

Deutch delivers a pitch-perfect performance as a lost soul who wrongly believes she has found her true self, only to trip all over it. Isaac, a real find, follows up her recent Amazon film debut, Don’t Make Me Go, with another impressive turn. Among others in the cast, veteran actress Negin Farsad is excellent as Danni’s boss, and the always welcome Embeth Davidtz turns up as her mother.

Producers are Caroline Jaczko and Brad Weston. The Searchlight release begins streaming Friday on Hulu. Check out my video review with scenes from the film at the link above.

Do you plan to see Not Okay? Let us know what you think.