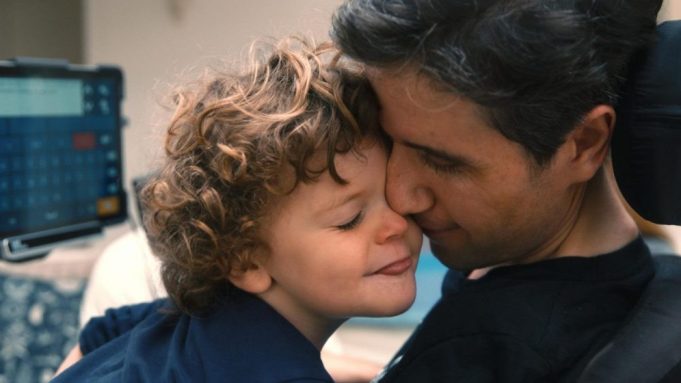 EXCLUSIVE: Progressive activist Ady Barkan’s political group is known as “Be a Hero.” It’s a motto he lives by, to judge from the documentary Not Going Quietly, which is making its world premiere in competition at the SXSW Film Festival.

At age 32 the Yale Law School-educated public interest attorney was diagnosed with ALS, the incurable neuromuscular disorder. It hasn’t stopped Barkan from becoming “the most powerful activist in America,” as Politico dubbed him, fighting for universal health care and other left-of-center causes.

In the clip above, Barkan leads a group of demonstrators demanding health care reform outside the Chicago offices of Republican Congressman Peter Roskam. When he reaches the office entrance, a Roskam staffer greets him politely but ordains that no cameras will be allowed inside. Instead of letting the matter end there, Barkan does not go quietly, as the title of the film suggests.

Not Going Quietly is directed by Nicholas Bruckman and produced by Amanda Roddy. Among the executive producers are Bradley Whitford (The West Wing, Get Out), and Jay Duplass and Mark Duplass (the Duplass brothers’ previous work in documentary includes the docuseries Wild Wild Country). Production companies behind the project are Duplass Brothers Productions, Bruckman’s People’s Television, Park Pictures, and PatMa Productions.

Barkan first gained wide notoriety in 2017 when he confronted then Arizona Sen. Jeff Flake on an airplane, questioning his support for the Trump-backed tax reform bill that could have triggered huge automatic cuts to health care and jeopardized his own care. The exchange went viral after a video of it was posted online. In the following years he was arrested over half a dozen times at various protests.

Last summer Barkan addressed the Democratic National Convention as Joe Biden was set to become the party’s official nominee, an unusual honor given that he had endorsed Sen. Elizabeth Warren during the primaries. His support of Biden at that stage was considered essential to help unify the progressive and centrist wings of the Democratic Party.

During his address, Barkan used a computer-generated voice to articulate himself, having lost the use of his natural voice to the paralyzing effects of ALS.

“In the midst of a pandemic,” he told the DNC audience, “nearly a hundred million Americans do not have sufficient health insurance, and even good insurance does not cover essential needs like long-term care.”

The documentary also delves into Barkan’s family life with wife Rachael King and their young son, who was born shortly before Barkan was diagnosed with ALS. Not Going Quietly is an acquisition title at SXSW. ICM is handling sales.

Watch the exclusive clip above.