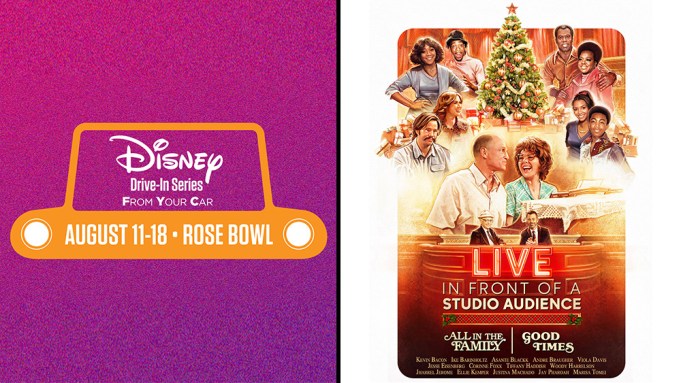 Wrapping up the weeklong Disney Drive-In Series, a live nightly event that magically turned Pasadena’s Rose Bowl parking lot into a vintage drive-in theater, we welcomed the legendary Norman Lear for a conversation about his multiple Emmy-nominated special Live in Front of A Studio Audience: All in the Family and Good Times featuring brand news casts in iconic roles. This was the follow-up to last year’s innovative Emmy-winning special that featured new versions of two classic episodes of All in the Family and The Jeffersons. With that one, Lear became the oldest Emmy winner in history, and now at 98 he is the oldest nominee ever.

This time around, the episodes were chosen to fit in with a holiday theme, as well as continuing relevance even a half century after they were first broadcast. In the talk I hosted before the special played for the industry voters packed into the Disney Drive-In, Lear gave a simple answer as to why it still seems fresh.

“I have said this before but human nature doesn’t change. We are basically the same people we were 40 or 50 years ago with many of the same problems, some we have worked through or developed new ones,” he said, noting that he and the production team spent three days in his house, morning noon and night, looking at possible episodes from which to choose.

Joining us on the panel — presented virtually on the big screen — was Lear’s production partner and executive producer Brent Miller, who was actually the first one contacted by Jimmy Kimmel, who had this idea to do the specials in the first place.

“We were really excited. After [rebooting as a Netflix, now Pop TV series] One Day at a Time, we had multiple people come to us and say, “Let’s do All in the Family, let’s do The Jeffersons‘,” Miller said. “But when Jimmy came to us it wasn’t to redo these shows, it was to honor them and pay homage to the writers, actors and producers who came before and put these shows on 40 years ago. So it was really exciting and gave us a chance to introduce these shows to a whole new generation.”

For director Pam Fryman, who is nominated along with Andy Fisher for Outstanding Directing for a Variety Special, it was a once-in-a-lifetime experience even as she admits to tearing her hair out when learning the live show would be partially interrupted by the vote in President Donald Trump’s impeachment trial. Just another day at the office.

“This live TV thing is very different,” she laughed. “There’s no time. It’s like a sporting event, a giant thrill and then it’s over.”

Watch the complete conversation in the video above. Live in Front of a Studio Audience: All in the Family and Good Times is nominated for four Emmys including Outstanding Variety Special (Live), Production Design, Directing and Technical Direction/Camerawork/Video Control — all in the specials categories.