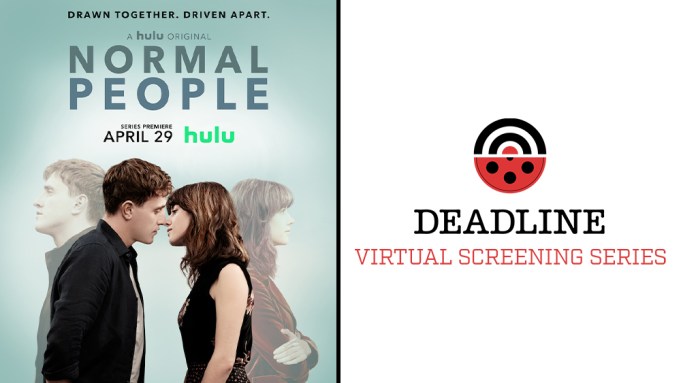 Hulu’s Normal People so powerfully details the heart-wrenching pain of first love, and the chemistry between its two lead actors is clearly electric. In fact, during auditions for the show, which follows the love story between bullied schoolgirl Marianne (Daisy Edgar-Jones) and Connell (Paul Mescal), their first chemistry read together reduced the room to tears.

“I didn’t know whether that was a really good sign, or a really bad one,” Edgar-Jones joked via video conference during an AwardsLine screening series panel discussion. “I’d never had that before. It was a very strange day.”

The show is based on the New York Times bestselling novel of the same name by Sally Rooney, who also co-wrote the script with Alice Birch (Lady Macbeth) and Mark O’Rowe. Coming into an adaptation of a very popular book added some extra weight to the audition process for Edgar-Jones, who had worked on the BBC series The War of the Worlds and ITV’s Cold Feet, but was otherwise relatively new to the screen.

“I’d read the book and I’d fallen so deeply in love with the character,” she said, “that I felt so anxious on that audition day because I knew that that was my only chance.” Fortunately, director and executive producer Lenny Abrahamson put everyone at their ease, she says. “Lenny has a really wonderful way of creating a safe space in an audition. It felt very much like a workshop, it didn’t feel like you were having to prove anything, it felt like you were able to explore and have fun… It very much felt like we clicked into a rhythm of Marianne and Connell really quickly and that’s a really lovely feeling.”

Having “furiously read the book”, Mescal felt he could imagine himself in the role of Connell before he got it. “You’re kind of used to, as an actor, getting [sent to audition for] parts that you’re like, ‘I can see ten other actors playing that part better,’ or, ‘that’s a total stretch,’ but for this one I felt like I fitted the breakdown, and I had an idea of how, if I was to play it, I would go about doing it. So there were no hiding places in that sense.”

Central to the development of Mescal’s character, Connell, is the relationship with his mother Lorraine, played by Sarah Greene (Dublin Murders)—a working experience Mescal thoroughly enjoyed.

“She just brings this gorgeous atmosphere to set that makes you really feel as an actor that you can play with her, and try things out,” he said. “There’s a scene in Episode 3 where you feel the power of Lorraine and her morals.” In that scene, Lorraine refuses to ride in the car with Connell after he has hurt Marianne’s feelings. “She’s a straight die in that sense,” Mescals added. “She doesn’t let Connell get away with anything, and in some ways that’s why the relationship is so strong… That whole journey with her and acting with her day in and day out was just a gorgeous experience.”

Abrahamson said of the Lorraine character: “She’s that type of parent who doesn’t take an c–p from their kid, and at the same time, loves them unconditionally. It is interesting that Sally chose to make the single mum and the young mum the really functional parent in this story.”

Producer Ed Guiney of Element Pictures pursued the rights to Rooney’s novel when it was still an unpublished galley, despite the fact that he was already developing Rooney’s first novel Conversations with Friends, and feared Rooney wouldn’t want him to have both books. “We got the manuscript about two years ago,” he said. “I was sort of half-hoping I wouldn’t really like the book, but of course that didn’t happen… it really announced itself as an incredible possible television series, just given that it was over time and it was focused on these two characters in this incredible love story.”

Guiney and Abrahamson have worked together on multiple projects, including 2015’s Room, for which they were both Oscar-nominated. During the panel they shared that they’ve known each other since they were 15 and attended Trinity College in Dublin together—the scene of much of Normal People. On reading the book, Abrahamson immediately felt compelled to work with the material. “After a few pages I knew that I felt really strongly about it,” he said. “I just had that feeling that comes sometimes where you can see something and you can kind of taste it… It was such a captivating book to read.”