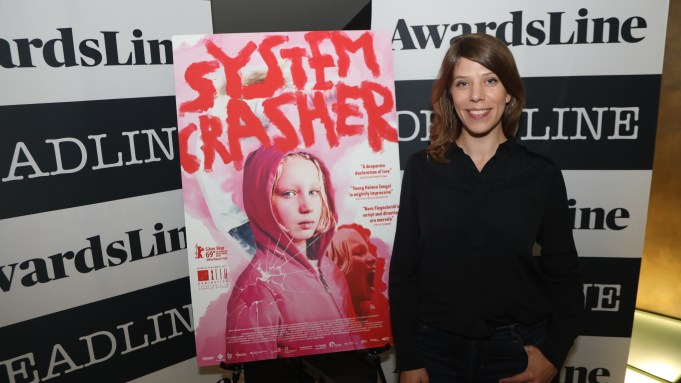 Germany’s selection for the International Feature Film Oscar race, System Crasher, is a stirring drama that centers on Benni, a 9-year-old girl with wild and somewhat volatile energy who is what Child Protection Services calls a “system crasher.”

Benni’s incalculable behavior makes it hard to place her in a consistent living situation, but all this young child wants is to be able to live with her mother again. When there seems to be no place left for Benni to go and no other solution in sight, an anti-violence coach tries to break the downward spiral of anger and aggression and set Benni free.

Benni is played by Helena Zengel, who was 9 years-old at the time of filming. The role called for some heavy material, mainly the use of strong language and violent behaviors. In order to prepare Zengel, writer-director Nora Fingscheidt had to “carefully” bring her into the role in steps.

“We started to prepare that role for six months once or twice a week, really carefully bringing her into the role but also separating Benni from Helena, making sure she never confuses the two people,” said Fingscheidt following a screening of System Crasher.

“She was also part of casting the adults,” the filmmaker added. “So always when I found somebody who was my favorite for one of the other parts, he or she would play with Helena. Through that process Helena would, piece by piece, understand Benni’s universe.”

It’s upsetting to think of any child going through what Benni experiences in the film, but Fingscheidt doesn’t intend for audiences to judge the character but rather to “get an understanding for kids like Benni,” she said. “We put ourselves in her shoes for two hours, and that’s basically all I wanted to do.”

With modest intentions, as well as a modest production budget, Fingscheidt did not anticipate the impact her film would have.

“What now happened in Germany is totally crazy,” she said. “We thought it’s a German arthouse low-budget movie. On average, those kinds of movies, five thousand people go an see it. By now, half a million people have seen it.”

Fingscheidt added: “No one from the team was expecting it, but it seemed to really touch a sensitive subject where a lot of people wanted to talk about it. I had no idea. And now politicians are making roundtables, renting cinemas. People from child care services with their whole team go see the movie and then have discussions about it in terms of what can we improve for kids. But that’s something I never even dreamed of that this movie can do.”

Check out the above video for the full conversation.