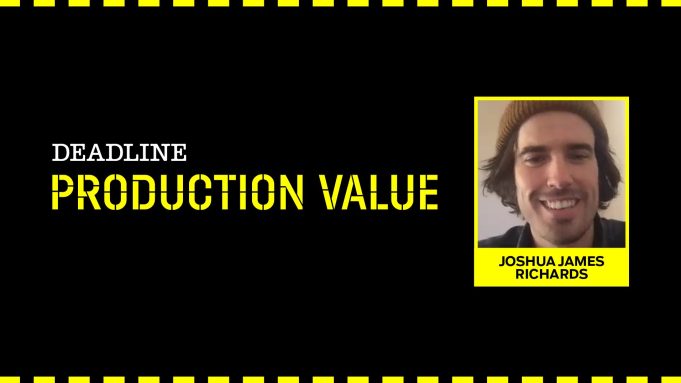 Since graduating from NYU less than a decade ago, cinematographer Joshua James Richards has crafted three acclaimed features alongside director Chloé Zhao, seeing their careers hit the stratosphere at the same time.

From an outsider’s perspective, one might think that Richards had experienced his big break years ago, given his success with Zhao’s first two low-budget features, Songs My Brothers Taught Me and The Rider. While Songs earned the DP Camerimages’ award for Best Cinematography Debut, The Rider was another festival favorite, generating a similar level of acclaim.

But from the point of view of Richards—who recently reteamed with Zhao on Nomadland—a truly monumental career moment is actually unfolding now. “It’s interesting to talk about because on paper, Songs could seem successful. However, from the point of view of the filmmakers, you also feel like, ‘Yeah, but we didn’t really get a theatrical release, or if we did, it was really small. No one really saw this movie. We’re definitely not making any money off it. How are we going to make a living out of this?’” he says. “You start thinking, ‘Well, we really believe in what we’re doing. But is there an audience for it?’ And that’s when you need a little bit of faith, I think, and a little bit of trust in yourself.”

Certainly, the trust Richards held onto in the early stages of his career was well placed. While the reception of Zhao’s first two features was disappointing, on some level, Richards’ experiences with them was critical to his artistic development, leading him to develop a filmmaking methodology that he recently took to new heights on Nomadland.

Crafted in a style of “heightened, super cinematic naturalism” that the DP had refined over time, Zhao’s third feature—based on a book by Jessica Bruder—tells the story of Fern (Frances McDormand), a woman who loses everything in the Great Recession, and decides to set out on a journey across the American West, embracing the lifestyle of a van-dwelling nomad. Landing Richards Camerimages’ coveted Golden Frog and the National Board of Review’s award for Outstanding Achievement in Cinematography, among other accolades, the film may well earn Richards his first Oscar nomination.

“In retrospect, it was losing all the trappings of what a conventional film set is that forced us to think differently. Because you have all these limitations, you have to think, ‘Okay, well we don’t have money for lights, so it’s natural light. We don’t have money for a crew, so there’s going to be like eight of us. What does that mean?’” the DP says, reflecting on his journey from Songs to Nomadland. “So, I guess what I’m saying is, it was an approach that was forced upon us, and I’m really grateful for that because it introduced to me a way of filmmaking that I’m really excited about.”

While Richards worked exclusively with nonprofessional actors on his first two films, on Nomadland, he was excited to embrace a new challenge, introducing A-list stars like McDormand into a world of real nomads, without changing his artistic approach.

“The process [always] starts in a very one-on-one, humanistic way, of Chloé going in and truly being interested in these environments, and these people and communities. It’s collaborating with them in telling their story, first and foremost, and you really feel like you’re a vocal instrument in the process,” he says. “Me, Chloe, Fran, these nomads and this environment are all pieces in this collaboration, and you’re all kind of feeling it as you go along.”

As was the case in the past, Richards relished the chance to immerse himself in a community he knew little about, bringing the truth and beauty of their experience to the screen, with a sense of intimacy, without imposing anything on their reality. “I feel like I have a purpose in filmmaking because I just feel like people like this are a dying breed. I meet them and they’re like these characters from another time, sort of a bygone era before the internet,” he says, “and getting to capture them in this time in America is just a privilege, getting to know their stories and looking into their world.”

In gearing up for the film, Richards chose cameras like the Arri Alexa Mini and the Arri Amira, along with a set of gimbals, which would allow him to be nimble on set and masterfully capture both the film’s subjects and the spectacular landscapes they’re set against.

Remarkably, he served on this film not only as cinematographer, but also as production designer, taking on that position for the very first time. “That came about in a haphazard way, probably a little bit [because of] our inexperience in how to work with a production designer on this kind of film. You know, it’s a little unfair on people sometimes to bring them into this and say, ‘Forget everything you know about what you do, and do it this way,’” he says. “[And] it just felt natural, this time around. I just offered to do it because I had the time, and I had a really specific idea of how I wanted the interiors of the vans to look—and specifically Vanguard, Fern’s van in the movie.”

On productions that are as organic and spontaneous as Zhao’s, Richards says, crewmembers sometimes need to get their hands dirty and wear multiple hats. “And really, you’re going into people’s homes and their environments, and you just need to make sure there’s the right temperament in that team,” he adds. “You’re not really coming in as filmmakers; you’re coming in as human beings.”

While Richards began working professionally as a cinematographer about a decade ago, he has always been called to express himself visually, finding his first way of doing so as a child by drawing. “We moved around a lot and I was always the new kid at school, so drawing was my way in,” he says. “That was the thing I was good at, and it just developed from there.”

Early on, he considered pursuing a career as a painter. But after realizing that “[he] didn’t have much to say” in that medium, he turned to the “freshness” of cinema, where he realized he could tap into the unexplored. “I was brought up on a pretty solid diet of cinema,” he shares, “particularly Westerns, which is unusual, actually, for someone growing up in the UK.”

As a kid, his father would wake him up in the middle of the night to watch films like The Searchers—and from that point, the American landscape came to consume his consciousness. “I got really into reading about Native America around 14, 13. I read Bury My Heart at Wounded Knee by Dee Brown, in particular, and that just kind of set my mind on fire,” he recalls. “[I read about] the myths of the American landscape and the myth-making machine that would become cinema, in defining, rightly or wrongly, the American character and history, and that started to really interest me.”

Of course, at this point in time, Richards had no idea of the role his early interests would come to play in his career, and in his kinship with Zhao, which he first struck up at the Apple Bar in New York, as a student. “Honestly, Chloe was just exactly the kind of person I’d left my country and my environment for. I wanted to meet people like that,” he says. “I wanted to meet people that came from a different world to me, that had their own unique story.”

The keeper of the compass on the improvisatory films that Zhao steers, as its captain, Richards remains inspired in his work by the filmmaking of Terence Malick, the enigmatic auteur behind such ethereal dramas as Badlands and The Tree of Life. “For me, he started something that quite frankly, I’m surprised more filmmakers haven’t embraced. I see it as a philosophy of a way that cinema can communicate,” he says. “It’s almost intangible, which is why it’s so hard to talk about. I just know that those films are remarkably powerful to me and have stayed with me, for whatever reason, more than others.”

For Richards, the joy in filmmaking is in discovery—and in considering projects to take on, he always is thinking about the life he wants to lead. “Because life’s too short, man. Me personally, I don’t want to shoot on a stage,” he says. “I know some people do, but I worry that as filmmakers, we can kind of skim through life.”

Throughout his career, Richards has traveled to a range of stunning locations, from South Africa, to Tokyo, to Mexico. “[But] I can’t tell you anything about those places because the whole time, I [had my eye in the viewfinder],” he admits. “So, I don’t want to skim through life. I want to feel that I learned something from these places that I went to, and learned something from the people.”

For more from our conversation with the Oscar-contending DP, as part of Deadline’s Production Value video series, click on the video above.