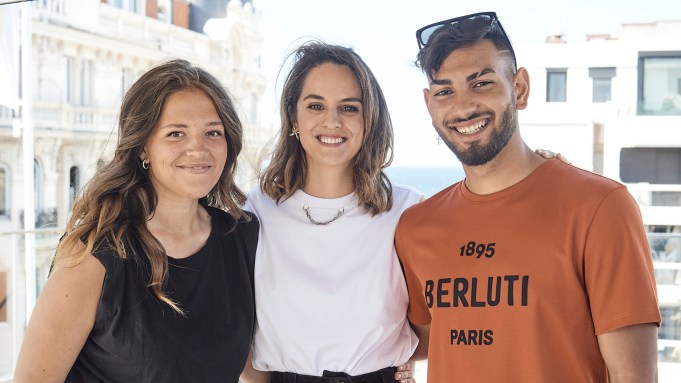 Lauded for her turn in Céline Sciamma’s 2019 Cannes Film Festival competition entry, Portrait Of A Lady On Fire, Noémie Merlant returned to the Riviera this year with her directing debut, Mi Iubita, Mon Amour.

The story follows Jeanne (Merlant), a young woman about to get married who travels to Romania to celebrate her bachelorette party. There she meets Nino (Gimi-Nicole Covaci) for a timeless early summer.

When Merlant stopped by Deadline’s Cannes Studio, she told us how the film came about in a sort of spur of the moment fashion. “We are a group of friends” who are seen in the film, and who were “always talking about cinema.” When Gimi invited them to spend the summer in Romania, “We said we must do a film together someday. Gimi said, ‘Let’s do it right away, about our friendship and our love story’.”

So, the troupe went to work and shot the film in 15 days. “We wanted to do it amongst ourselves, it had to be that summer and not another… To make the film like that in the intimacy of the group, it corresponded to the scope of the film,” Merlant explained. But it was also “diving into the unknown… The shoot was intense and every day we had to find ways to be able to continue because we did it with a certain urgency.”

The Special Screenings selection is produced by Nord-Ouest Films and sold internationally by Films Boutique.

Check out more from our conversation with Merlant in the video above.