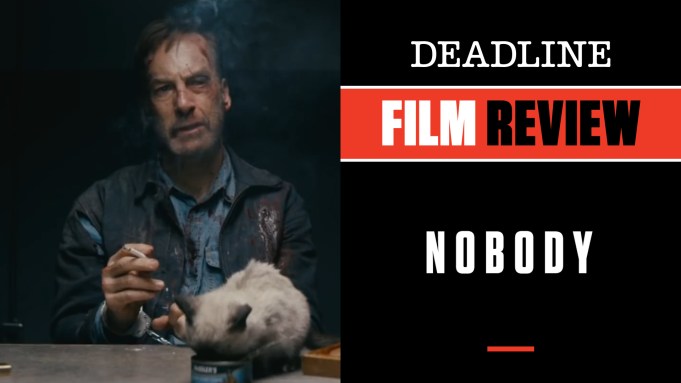 OK, following in the footsteps of Clint, Bronson, Sly, Arnie, Bruce, The Rock and who knows who else comes the movies’ latest kickass action superstar. And it is — wait for it — Bob Odenkirk? Don’t be fooled by the initial concept or the title of the Better Call Saul/Breaking Bad actor’s first starring macho, testosterone-loaded action flick, Odenkirk is the real deal without losing the persona for which we know him best.

Actually, for the film’s first few minutes, he delivers exactly what we might expect. Odenkirk plays seemingly nebbish Hutch Mandell, a suburban husband and dad living the mundane life, schlepping to a dull job, supported by a sweet wife (Connie Nielsen) and kids including son Blake (Gabe Munroe) and his young daughter. His almost invisible presence in the world is interrupted one night by way of a home invasion perpetrated by a couple of toughs out to rob his family. With Blake in the middle of a confrontation, and with Dad grabbing a golf club but not using it or even confronting the bad dudes, Hutch is ridiculed by his son, the police and even his disappointed wife for not coming to the rescue of the family. This clearly irks him and has the effect of unleashing his hidden inner Kraken.

Taking off very late at night, Hutch is determined to exact some sort of revenge, his initial target being a gang of five or so rambunctious young Russians who are on a bus that Hutch takes over, dispatching the driver and emptying bullets from a loaded gun in a macho display to taunt them.  Shockingly, this heretofore unimpressive guy takes them all out in Superman fashion, sending the group to the hospital. One of them however turns out to be the younger brother of feared Russian gangster Yulian (Aleksey Serebyakov), who vows revenge against whoever did this to little ‘bro. The fight between Hutch and the Russian mob is game on.

For this 90-minute non-stop action film, that is about all the plot detail you need. Suffice to say that between gunplay and numerous other ultra-violent sequences this could well be called Atomic Nobody, with Odenkirk’s character slowly revealing his unique training in a past he apparently had locked away in a vault; this guy is formidable and it has all come to the surface. His main nemesis now, as played in hilarious over-the-top fashion by the esteemed Serebyakov, will not be stopped in his quest to seek out and bury Hutch, all leading to a big finale where Hutch gets the help of his own little mob comprising his retired FBI agent father (Christopher Lloyd, in an amusing supporting turn) who lives watching TV all day in a nursing home now but gets the itch for one last big job, and Hutch’s adopted brother (played with zest by RZA).

Although the impetus for all this mayhem doesn’t hold the emotional hook of say, Charles Bronson avenging the rape and murder of his wife and daughter in Death Wish (or even Bruce Willis doing the same in the inferior remake), Odenkirk makes it all somewhat palatable in letting us believe this “normal” man was a ticking time bomb waiting to go off in plain sight. He looks like he is having a blast in the role, and that makes all the familiar action tropes trotted out here watchable once again, even the now tiring clichéd Russian mobsters. Director Ilya Naishuller, a native Russian himself, previously directed the loopy, cyberkinetic Hardcore Henry in 2015, and here shows he knows how to get things moving for the target audience, as does screenwriter Derek Kolstad, who after creating John Wick for Keanu Reeves has now done the same for Odenkirk in this unlikely franchise starter that seems perfectly set up for sequels. One odd touch setting it apart from numerous others in the genre is the wacko soundtrack with tunes like the ’60s Broadway anthem “I’ve Gotta Be Me” sung by Steve Lawrence and Eydie Gormé, just one of the offbeat song choices to accompany gut-crushing fighting.

Check out my video review above with scenes from the movie. Do you plan to see Nobody? Let us know what you think.