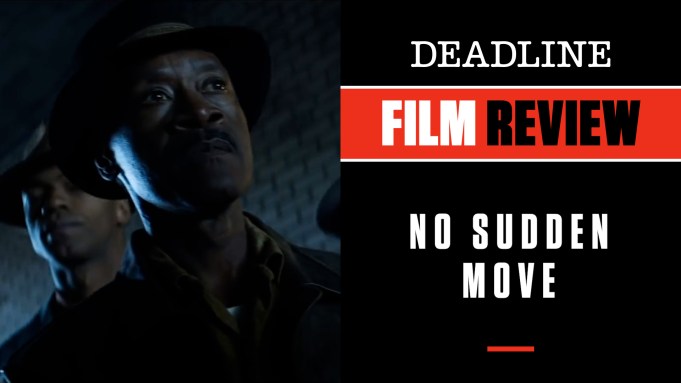 The prolific Steven Soderbergh’s latest, No Sudden Move, had its world premiere over the weekend as the centerpiece of Tribeca Fest before the Warner Bros release heads directly to HBO Max on July 1. It is the kind of twisty, noirish period crime thriller that is great to see on the big screen — as I was able to do last week — but any way you can find it, find it. It’s a must-see in the Soderbergh canon, a blend of elements of everything from his Out of Sight to his trio of Ocean’s films, but mostly a cool story all its own and owing to inspiration from crime flicks of the mid-’50s, the era in Detroit in which it is set.

What makes it such a cool pleasure is its superb ensemble cast, each getting a chance to do their considerable thing including Don Cheadle as Curt Goynes, a small-time criminal just out of prison and looking to get his life together when a mysterious guy known only as Jones (Brendan Fraser) enlists him to pull off a simple job: stealing a document and getting it to the unknown person who desperately wants it. Jones also brings in a couple of petty crime regulars in Ronald Russo (Benicio Del Toro) and Charley Barnes (Kieran Culkin) essentially to “babysit” the family of the man Goynes must escort to his office to retrieve this document from the boss’ safe. Thus the invasion of the home of Matt Weitz (David Harbour) and terrified wife Mary (Amy Seimetz), and their two kids including a son (Noah Jupe). What sounds like a snap gets more complicated than planned and starts coming apart at the seams as screenwriter Ed Solomon’s plot thickens and expands to include a host of others interested in this piece of paper, and the suitcases of cash it inspires for its delivery.

Among those encountered along the way is another criminal named Frank Capelli (a perfectly cast Ray Liotta), his wife Vanessa (Julia Fox), the local kingpin Aldrich Watkins (a perfect Bill Duke) and his associates, and detective Joe Finney (Jon Hamm) who is on the case as it were. It all takes a twisty path leading to another character played by an unbilled Matt Damon, who is excellent here in an extended cameo that helps tie some loose ends together, as Solomon shows he has much more to say than the average movie in this genre — issues involving Detroit’s big car companies and perhaps their own criminal undertakings, facts taken from actual cases circa 1954 where this film takes place. The treatment of the African American community also weaves in and out here, adding even deeper layers to the plot.

Soderbergh is a great student of film in addition to being a director who can tackle any genre and make it work in most instances. This film hits a sweet spot for me, reminiscent of such supreme ’50s-era crime dramas as Stanley Kubrick’s The Killing and Robert Wise’s Odds Against Tomorrow. Despite whatever inspirations may have come, No Sudden Move makes just about all the right moves on its own and delivers the kind of satisfying entertainment this genre has long deserved in a modest, effective way minus the flash of more modern influences.

Shot in Detroit in a “bubble” during the pandemic, Soderbergh and his team pull it all off seamlessly with no end of thanks to this cast. Cheadle is at the top of his game, and nicely matched by Del Toro (who won an Oscar for Soderbergh’s 2000 Traffic) and Culkin, who on top of Succession is having his own renaissance. Harbour has a role here that suits him to a tee, and it is so nice to see Fraser once again doing some fine character work. Jupe is excellent, and among the women Seimetz is fine, and particularly Fox, with both nailing their scenes. Damon is memorable to say the least.

Casey Silver is the producer.

Check out my video review above with scenes from the film. Do you plan to see No Sudden Move? Let us know what you think.