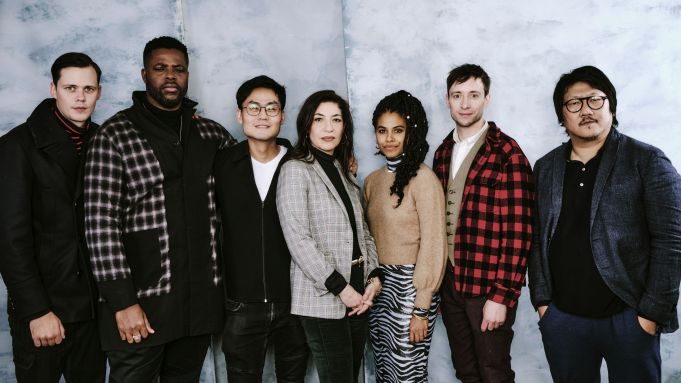 When writer and director Edson Oda set out to make his supernatural drama Nine Days, he wanted to create something “very human, very emotional, but in a reality that is not necessarily the reality that we live.”

“I always liked those kinds of weird premises and world-building, said Oda who stopped by Deadline Sundance studio before the film’s Monday premiere at the Sundance Film Festival. He was joined by his ensemble cast that included Winston Duke, Zazie Beetz, Benedict Wong, Bill Skarsgard, David Rysdahl, and Arianna Ortiz.

“I felt that in Nine Days, I would like to do that but in a way, how can I attach something that is very human, very emotional, but in reality that is not necessarily the reality that we live,” said Oda.

The film centers on Will (Duke), a reclusive man who spends his days in a remote outpost watching the live Point of View of people going about their lives, until one subject perishes, leaving a vacancy for a new life on earth. Soon, several candidates — unborn souls — arrive at Will’s to undergo tests determining their fitness, facing oblivion when they are deemed unsuitable. But Will soon faces his own existential challenge in the form of free-spirited Emma (Beetz), a candidate who is not like the others, forcing him to turn within and reckon with his own tumultuous past.

“It is about this limbo, this place that doesn’t exist,” said Oda. “For me, I love creating new worlds, but I also love connecting with people and exploring human emotions through the acting and through my writing. So it was kind of a combination of both how can I be personal but at the same time, show something that I think no one has ever seen.”