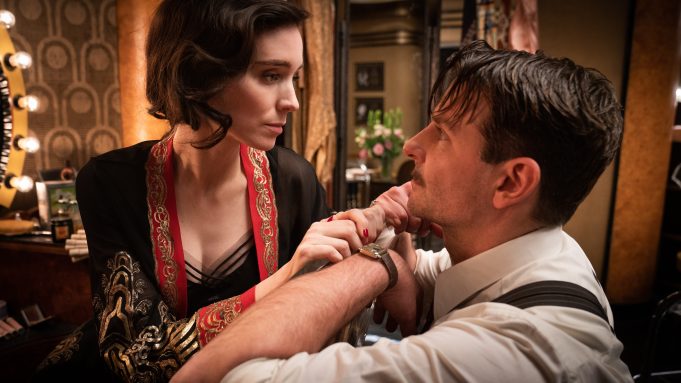 When you hear the name Guillermo del Toro, you usually associate the Oscar-winning director with fantastical filmmaking, monsters, supernatural elements and gothic stories from another world. But maybe for the first time with his remake of the 1940s film noir Nightmare Alley, he is dealing on a smaller scale more focused strictly on people, albeit a big part of it is set in a colorful traveling carnival full of freaks and other distractions.

Nevertheless this is pure new film noir based on a classic film noir most people probably haven’t seen but might want to check out, especially after seeing this gorgeous-looking remake (the Criterion Collection has a stunning 4K Blu-ray restoration out of the ’47 movie). Del Toro finds his own way into it, specifically in exploring the character of Stanton Carlisle, a bad guy haunted by his past, spinning his way into a darker existence sparked by distinct relationships with three women — each making their own unique impact on him. Del Toro and co-writer Kim Morgan describe him as a “homme fatale” in a tip of the hat to the standard femme fatales so prevalent in the genre.

Del Toro actually is relying here more on the source material, the 1946 novel by William Lindsay Gresham, a controversial book upon publication that only became a movie the next year because huge 20th Century Fox matinee idol Tyrone Power had just come back from the war and wanted to do something that would be a challenge and unexpected. Against Darryl F. Zanuck’s wishes, he certainly got it with the offbeat Nightmare Alley — and along with it, the best reviews of his career.

It is easy to see why an actor would want to play someone as personally complicated, brutal and lost as Stanton Carlisle, but Bradley Cooper, who grabbed the role in this new version, makes it his own and brings frightening new layers to it. It doesn’t hurt to have a supporting cast that includes Cate Blanchett, Toni Collette, Rooney Mara, Richard Jenkins, Willem Dafoe and Ron Perlman, who is actually the person who brought it to del Toro’s attention three decades ago, having wanted to play the lead himself. Perhaps for the times in which we currently live — where a huckster-style con man and grifter can become president and where as a society we seem to be drifting into darker alleys every day — now is the time for another stab at this material. And del Toro, whose mantra is trying to decide if we shall be monsters or humans, probably is the perfect person to bring it on.

For the Oscar-winning director of The Shape of Water, Pacific Rim, Crimson Peak, Pan’s Labyrinth, Hellboy and more, this is a first film without otherworldly elements — unless you count the inventive collection of freaks on display at the singular carnival at the center of the story. And if you can get past the first 10 minutes, where we see a star attraction of this freak show starved to near death in order to graphically eat live chickens for the amusement of the crowd, then there is much to admire in the next two hours and 20 minutes not quite as unappetizing.

It all starts circa 1939, with Stanton leaving his home after setting it — and what seems to be a wrapped body of some kind — on fire. He quickly ends up at a traveling carnival full of wonders, mentalists and, most especially, bizarre and twisted acts that will make you think del Toro is remaking Tod Browning’s 1932 Freaks rather than Nightmare Alley. Unlike the original film, del Toro ratchets up the human oddities on display, particularly with an infatuation with a one-eyed fetus he keeps returning to the spotlight all the way into the end credits. Stanton finds his way into employment as part of the mentalist act of Zeena (Collette, great in the role Joan Blondell made famous). It is a grift, of course, but one the crowd eats up with awe. Zeena, married to sage alcoholic Pete (a really fine David Strathairn), also eats up the new arrival in town, seducing Stanton as he pays for a dime bath in her house. He also strikes up a friendship with one of the acts, a sweet young woman named Molly (Mara), who eventually helps groom him to become a star in his own right after moving on from the carnival.

After del Toro spends a solid hour in this atmospheric setting, the story moves on to the big city two years later in 1941, where Stanton is now a star-attraction spiritual mentalist. At his show one night, a “mark” in the audience turns out to be someone who can see right through his act. Cue the entrance of alluring — and dangerous — psychologist Dr. Lilith Ritter (a divine Blanchett), who gives as good as she gets as she tries to help him come to terms with his past and present as sizes him up immediately for her own dark purposes. It is best to just sit back and drink up the sharp interplay between these two who travel down an ever-winding (literal) rabbit hole together; it’s bad boy meets bad girl, so who is there to root for? Molly is in all this as well, but it’s going downhill between them as Stanton convinces her to help do his dirty deceptive work, particularly involving Ezra Grindle (Jenkins) in a grift to get his money. The fun is in watching where it all leads as we see Stanton emerge then submerge, heading to a conclusion far more intriguing and satisfying than the hokey one demanded by the studio for the 1947 film.

Dafoe as the head carney, Perlman as Bruno the Strong Man and Mary Steenburgen, in two brief but memorable moments, also get some screen time. Cooper has one of his best roles here, not an easy one to play — this broken man who can’t seem to redeem himself — but he does exceptionally well, bringing far more depth and risk-taking than Power was allowed to display. Blanchett clearly was born for noir and steals the show as usual. Along with the cast, the real star attraction is Tamara Deverell’s brilliant and vibrant production design and Dan Laustsen’s sumptuous cinematography. Luis Sequeira’s costumes are perfect in setting the style of the period, and Cameron McLaughlin’s editing is precise, even if this version runs 40 minutes longer than the original and could have used a bit more trimming in the second half. Nathan Johnson’s score adds to the mood and effectiveness of this welcome throwback entertainment that noir and del Toro fans should devour.

Producers are del Toro, Cooper and J. Miles Dale. Searchlight releases it December 17 only in theaters (where it belongs). Check out the trailer at the link above to see what I am talking about.

Do you plan to see Nightmare Alley? Let us know what you think.