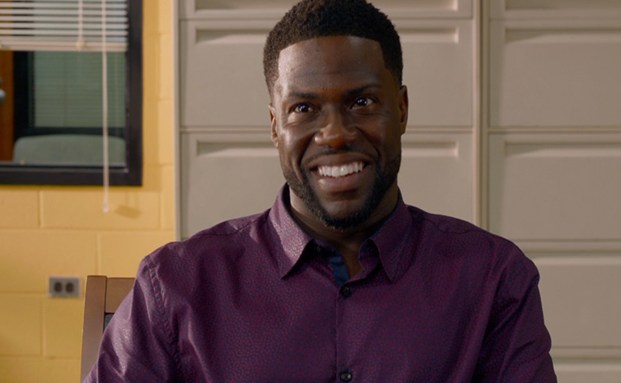 Rodney Dangerfield made the most of an older guy going back to class in 1986’s hilarious Back to School. Now doing the same sort of thing (but not quite) in Night School, the usually very funny Kevin Hart doesn’t make the grade in this largely unfunny comic vehicle teaming him and Tiffany Haddish in what should have been an inspired combo.

Haddish, who seems to be in every other upcoming movie these days, was a breakout sensation as part of the Girls Trip ensemble last year, and she’s been smartly cast as the take-no-prisoners night school teacher here by her Girls Trip director Malcolm D. Lee. It is nice to report she isn’t the problem. As I say in my video review (click the link above to watch), in fact she comes across as the only recognizable human being in the whole cast.

Hart might have taken on more than he can chew this time, not only producing with Will Packer but also writing with five other credited screenwriters (and probably others going without credit), providing a mishmash of largely wasted opportunities to yuk it up. He dresses up as a chicken to hawk a faith-based franchise called Christian Chicken; he spars in the ring in a one-sided MMA match against Haddish, who whips his ass when he starts failing as her student; he takes over a high school dance; and he leads an Ocean’s 11-style caper as he and fellow night school students break into the principal’s office to steal answers for their must-pass GED test.

Plotwise, that GED test is everything to Teddy (Hart), a high school dropout working as a barbecue salesman who accidentally blows up the warehouse after lighting up a series of propane-driven barbecues to make a romantic mood for a marriage proposal to gf Lisa (Megalyn Echikunwoke). Along with the building going up in flames, Teddy is hurled out of this inferno, landing across the street on top of a car’s windshield. Hart seems to like to put himself in physical danger, as in another scene where he tries to save his car from being repossessed and backs it off the tow truck straight into a flagpole at full speed. Even the Road Runner is more subtle than some of this stuff.

Out of a job and trying to impress his fiancée, he tells her has a new high-paying finance job with an old friend, Marvin (Ben Schwartz). He doesn’t have it, actually, until he can pass a GED test, thus his enrollment in night school in the class run by Carrie Carter (Haddish). Problems arise with the fact the school’s principal (Taran Killam) is a nerd he bullied in high school.

In one of many failed attempts at humor, this principal rules the halls of his school carrying around a baseball bat a la Morgan Freeman in Lean on Me, the poster displayed behind his office desk. Only problem is that movie was 29 years ago and the joke (played several times here) might be lost on the PG-13 audience this contemporary comedy targets. Actually the rating is part of the problem as it seems to hold back both Hart and Haddish, who have fared much better with racier material. Their first insult-hurling meeting in the film, as their cars nearly collide, is a preview of what unfortunately isn’t to come.

Most of the action takes on an ensemble nature as the night school class is made up of stereotypical adults in the same boat with Teddy. Mary Lynn Rajskub is fairly amusing as a mother trying to get away from her kids; Rob Riggle is the world’s dumbest grownup; Romany Malco tries hard to make sense of his conspiracy theorist; Anne Winters doesn’t have much to do; Al Madrigal is a waiter fired after an incident where Teddy tried to skip out on the check and now faces him in class, of course; and then there is Fat Joe as a prisoner taking the course by Skype. It is a ragtag bunch to be sure and had potential, but all are left with barely one-dimensional characters and situations to play. All deserve better, as does Hart and Haddish. So here’s hoping for the next time. Universal releases the film today.

Do you plan to see Night School? Let us know what you think.