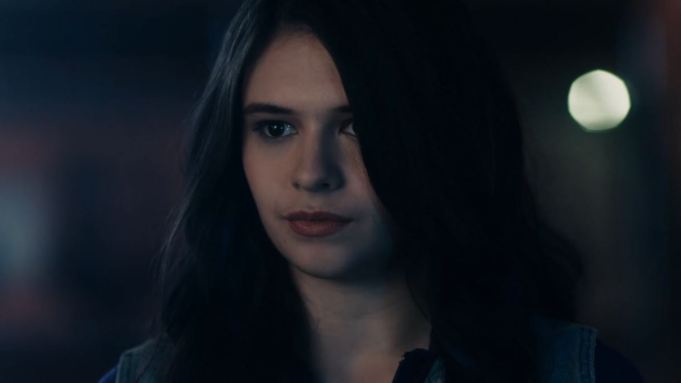 EXCLUSIVE: Bit, the “supernatural, super feminist, and super queer” vampire film starring actress and transgender activist Nicole Maines (Supergirl), is making its world premiere tonight at the Inside Out 2019 Toronto LGBT Film Festival, but you can watch Deadline’s exclusive preview clip in the meantime.

Bit, written and directed by Brad Elmore, stars Maines as Laurel, a small-town newcomer to Los Angeles who gets fanged and drained by a punk-feminist vampire after a warehouse party. Surviving, Laurel must decide whether to join the ultra-hip vampire clique or rick staking out her own path in the big city.

The opening paragraph of the official synopsis: “Desperate to get away from her small-town roots and find a like-minded community, Laurel hits the road for Los Angeles as soon as she graduates from high school. Sure, people in L.A. are different, but do these people seem extra different? Yes, they do, because they are vampires.”

Maines was famous first as the New England transgender activist who prevailed in a landmark 2014 discrimination case that resulted in transgender students getting access to campus bathrooms that align with their gender identity. Maines showed she might have screen potential on HBO’s The Trans List and then proved it with a 2015 appearance on USA’s Royal Pains that went on to win a GLAAD Media Award.

Early this year, Maines made broadcast history as the first transgender action hero when she donned the mask of the telepathic heroine Dreamer on the CW series Supergirl. In Bit, Maines is again playing a young woman who keeps more-than-human company.

Here’s the remainder of that official synopsis for Bit: “On her first night out in the city, Laurel attends a warehouse party and befriends a mysterious group of punk feminist women, led by the intimidating Duke. Laurel is surprised to have met her people so quickly, but her luck turns when one of them feeds on her blood and leaves her for dead. Waking up and realizing she might have become a vampire, Laurel confronts the women who converted her and is given a choice: go back to a boring life or join an ultra-cool vampire squad. Could it possibly be that simple? Of course not.”