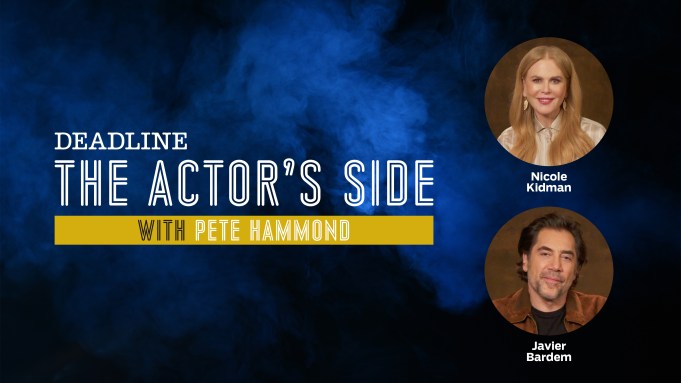 Nicole Kidman, who is starring as Lucille Ball in Aaron Sorkin’s Being the Ricardos, feels Lucy and her husband Desi Arnaz were not only predestined to be together romantically and as a couple, but also to work together in perhaps the most famous sitcom of all time. In a conversation with her co-star Javier Bardem, who plays Desi in the film, both join me for this week’s episode of my Deadline video series The Actor’s Side. Both Oscar-winning stars show why they may also have been predestined to take on these equally famous icons for Sorkin’s look behind the scenes of the fascinating marriage and professional partnership for the ages.

As Bardem explains, he was actually aware of the project early on and went after the role even though before taking it on he wasn’t that proficient in singing, playing guitar and conga drums, or anything else for which Arnaz was famous. He says as an actor you just say ‘yes’ and figure it out later. Kidman says the same was true for her, particularly in learning to do the level of physical comedy Ball was so famous for doing.

However for Kidman, the story is really about Lucille Ball, not “Lucy” and her extraordinary relationship with Desi, not “Ricky Ricardo,” that makes this film so fascinating to see, as well as to have been a part of. Was it a risk for both? Of course, but Kidman has made a career of taking risks, telling me she has always acted spontaneously in making career decisions and now even into her 50s she is still doing that.

Both also praise their writer-director Sorkin for being the guiding light here, and also talk about how Ball and Arnaz were way ahead of their times in a business sense. Not only did their production company, Desilu, produce I Love Lucy and many other sitcoms of the time, they also were the entity behind Star Trek, Mission: Impossible, The Untouchables and many other shows that have turned into valuable motion picture franchises still going strong today.  And of course the same can be said for I Love Lucy, which thanks to the foresight of Arnaz was produced using a film process that allows it still to be seen around the world and never out of circulation in reruns.

Amazon Studios’ Being the Ricardos adds further to the legend and can be seen in theaters and streaming on Amazon right now. However, we begin our conversation where I asked Nicole about the widely aired commercial she did for AMC Theatres in which she extolls the virtues of the moviegoing experience in an effort to get people back to the cinemas after the devastating effects of Covd shut them down.

To watch my chat with  Kidman and Bardem and get the ‘actor’s side’ of it all from both, click on the video above. And join me each Wednesday during Oscar season for another edition of The Actor’s Side.