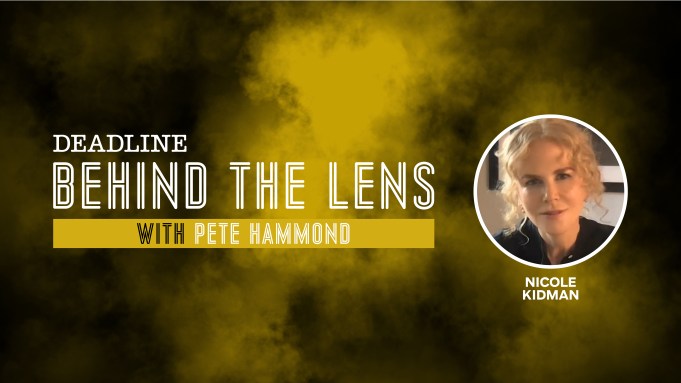 Two years ago, Nicole Kidman appeared on my Deadline video series, The Actor’s Side. Among other things we talked about her limited series, Big Little Lies. It was primarily about acting, that conversation, but what I also discovered was that Kidman has become just as prolific a producer with her company, Blossom Films and production partner Per Saari.  She went on to win two Emmys, one for Lead Actress in a Movie or Limited Series and one for the show itself, on which she served as one of its producers.

Now for my other Deadline video series, Behind The Lens, I thought the time was right to talk about her work behind the scenes in more detail, especially since she is once again in the thick of the Emmy conversation for the follow-up series to Big Little Lies, one in which her character gets to explore the effect on the abused after the abuser is gone. It is an idea she says that drew her especially to this HBO project again, plus the fact that she and co-stars did not want to leave these women behind, but wanted to explore more about them. In fact, she says there are ideas floating that could even lead to a third go-round, that there is ripe material still there. The show this time around is competing as a Drama Series, so it is a bit of different territory than before.

One of her co-stars in it is Meryl Streep who played her mother-in-law. She says she and Streep just worked together in Ryan Murphy’s Netflix adaptation of the Broadway musical, The Prom, a film in which they sang and danced, but one she says is also importantly about something. Though Kidman had finished shooting, the film itself was just a couple of weeks shy of finishing when the COVID-19 pandemic shut it down. We talk about how the timing might just be right for it when they can finally get it seen. We also begin our interview with her thoughts about how she is dealing with this crisis, as well as her involvement in television now in addition to movies, the way Blossom Films develops and nurtures its projects, and so much more including the first film she produced, the brilliant Rabbit Hole which earned her one of her many Oscar nominations  and effectively launched her producing ambitions. There is so much here, including talk of another limited HBO series, The Undoing, in which she starred with Hugh Grant and which has been delayed due to the pandemic shutdown. It devastated her, but she’s got a good attitude and a whole lot to offer when everything hopefully can get back to the way it once was. To watch an edited version of our interview click the link above. Or better yet, you can see the whole half-hour conversation in its entirety below. It’s always fun to talk to Nicole Kidman.

Watch the full version of Kidman’s Behind the Lens interview here: