Continue to Deadline SKIP AD
You will be redirected back to your article in seconds
Skip to main content
January 5, 2022 2:08pm 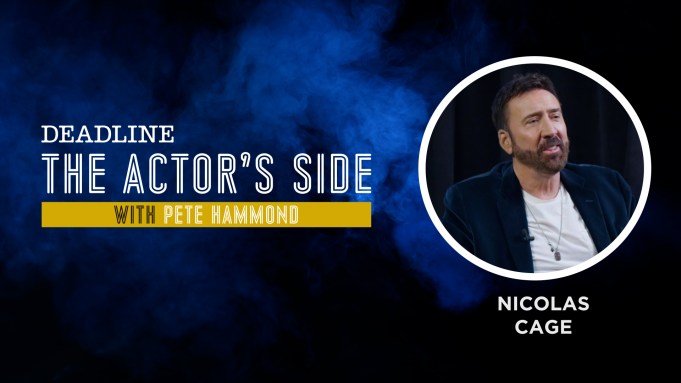 Nicolas Cage joins me today for a wide-ranging conversation for my Deadline video series, The Actor’s Side. We talk about the critical praise and awards buzz he has been receiving for the summer release Pig, in which he gives one of his best-ever performances and for which he is nominated for the Best Actor Critics Choice Award and already has received numerous Best Actor wins and nominations from regional critics groups. Could it bring him a third Oscar nomination for Best Actor? He won for 1995’s Leaving Las Vegas and was nominated for 2002’s Adaptation.

He never has stopped working, but with Neon’s very indie character study Pig, he has received some of his best reviews ever and it represents the kind of independent movie that he calls “my roots.” Not that he is putting down any of the long list of studio films in which he has starred; he talks about that period in his career and — at the start of our chat — even muses about the upcoming announced remake of Face/Off, the 1997 John Woo-directed classic in which Cage co-starred John Travolta.

In addition to all things Pig, we talk about Leaving Las Vegas and why he says no studio would touch it. He also discusses working with the likes of Joe and Ethan Coen on Raising Arizona; Martin Scorsese on Bringing Out the Dead (which he is excited about a new HD restoration happening); Norman Jewison on Moonstruck and why the director says his performance was “too good”; Ridley Scott on Matchstick Men; and Andrew Bergman on Honeymoon in Vegas, among other movies.

Regarding the latter, he says he loves doing comedy and that was a fun experience, though he had no idea it was adapted into a Broadway musical until I informed him of that fact. He wants to do more comedy, which is why Cage says he did the upcoming 2022 release The Unbearable Weight Of Massive Talent, in which he plays both the younger and current version of himself as, yes, Nicolas Cage (Lionsgate releases it in April).

We also talk about his first film, Fast Times at Ridgemont High, which was a great launching pad for many then-young stars — but, as he says, not him. He does tell me the one good thing he believes came out of that experience, and it has to do with his given name, Nicolas Coppola. And speaking of that family connection, he has some very interesting things to say about Uncle Francis and the significance of The Godfather Part II.

Calge also talks of his actual inspiration for getting into acting — and no, it had nothing to do with his famous family but instead was because of seeing a certain double feature at the New Beverly Theatre when he was 15. Don’t miss this conversation which you can watch and get the “actor’s side” of things from Nicolas Cage by clicking on the link above.

Join me for a new ‘Actor’s Side’ every Wednesday during Oscar season.