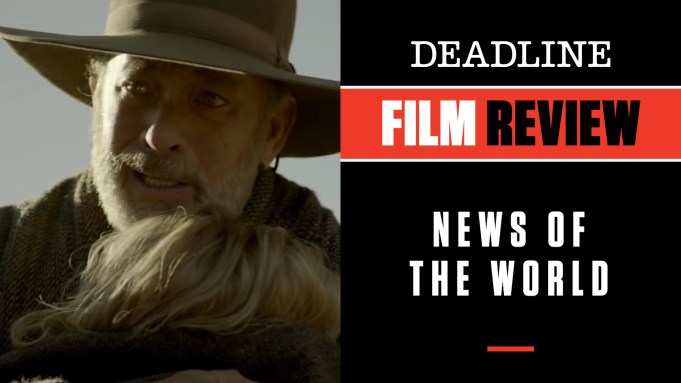 The United States is anything but united. The country has gone through a disastrous event that has left 600,000 dead. Half of America has lost the battle and still does not want to accept the outcome. America is more divided that it has ever been, and fake news — or what people want to believe — is rampant. Distrust is everywhere, and the chances of healing the country to become one America once again seem like a long shot.

And of course I am talking about 2020. Nope. This is the basic landscape of the U.S. five years after the Civil War in the treacherous waters of 1870 depicted in the prescient and surprisingly relevant epic western News of the World. It’s from Paul Greengrass, who has not shied away from cinematically chronicling disturbing political events in more contemporary films such as 22 July, United 93, Green Zone and Captain Phillips. The latter starred Tom Hanks as an ordinary American rising to the occasion in which he had Captain in his job title, as does this film — which, between the lines at least, says much about the state of the country now as well as when it is set.

Hanks plays Captain Jefferson Kyle Kidd, a widower and Civil War vet now traveling the country delivering nonfiction news in a storytelling style that entertains and informs those in the small towns he passes through. He is the CNN of his time, only with some showbiz flair thrown in. As he roams through Texas, he runs into a 10-year-old girl named Cicada (Helena Zengel), though he birth name actually was Johanna Leonberger. For the past six years she has been brought up by the Kiowa Indian tribe after they decimated her family. She only speaks their language and knows no other life. Kidd reluctantly agrees to take her back to her original hometown and her aunt (Winsome Brown) and Uncle (Neil Sandilands). The film then centers on their journey, episodic in nature, as the two warm to each other and forge a unique bond, both unwittingly healing together after a devastating war took such a toll on their own lives.

Along the way they meet general-store owners Doris (Mare Winningham) and Simon (Ray McKinnon). They take refuge with Dallas Livery Barn owner Mrs. Gannett (Elizabeth Marvel). A ferocious gun battle right out of a classic western ensues with Almy (Michael Angelo Covino), a Confederate soldier who still believes the war is going on. They find an unexpected ally in John Calley (Fred Hechinger) and fend off Farley (Thomas Francis Murphy) a man who won’t settle until the country is 100% white. There’s also the lawyer (Bill Camp) who knows a few things about Kidd’s past, and others along the way.

Greengrass keeps the pace deliberate but adds some terrific action set pieces including one hell of a dust storm that compares to the ice storm faced by George Clooney and the young girl he teams up with in The Midnight Sky, which also was (favorably) reviewed this week, and like this one has current value. In both cases, Hanks and Clooney lose sight of their young companion only to see her miraculously appear again. In News of the World, though, there is quite a poignant twist when her former tribe also appears. It really is a stunning sequence, an example of the filmmaking prowess of Greengrass, who takes what could have been a conventional genre movie, turns it on its head and gives it gravitas but still invests it with all the power of the great Hollywood studio films. This one recalls John Ford’s 1956 classic The Searchers, perhaps the greatest film John Wayne ever starred in. Tom Hanks, like Wayne in that, is understated but embodies the strength and wisdom of a great American on perhaps a final mission: to bring this girl back home and maybe find the better part of himself in the process. Hanks again is magnificent, and Zengel (The System Crasher) is a newcomer who will be around for decades. She’s unforgettable.

The production values here are top of the line, with superb cinematography from Dariusz Wolski, excellent production design from David Crank and one of the finest scores ever from James Newton Howard. Greengrass shares screenplay credit with Luke Davies in an exceptional adaptation of the bestselling 2016 book by Paulette Jiles, weaving a story of two somewhat lost and fractured souls on a journey of healing after suffering the wounds of a war that tore a country apart. Every day it seems this story becomes more urgently vital in shining a light on contemporary America, perhaps much more than the filmmakers ever could have imagined while they were making it. In so doing, this is a tale of another time in America that couldn’t be more important for these times. Journalistically, I shouldn’t be burying the headline, but News of the World is a towering piece of moviemaking.

Gary Goetzman, Gail Mutrux and Gregory Goodman are the producers. Universal will release this in theaters (wherever they are open) on Christmas Day. VOD won’t be far behind. Check out my video review with scenes from the film at the link above.

Do you plan to see News of the World? Let us know what you think.