Warner Bros Discovery CEO David Zaslav On Rumored Merger Talks: "We Are Not For Sale"
Read the full story
February 18, 2020 9:52am 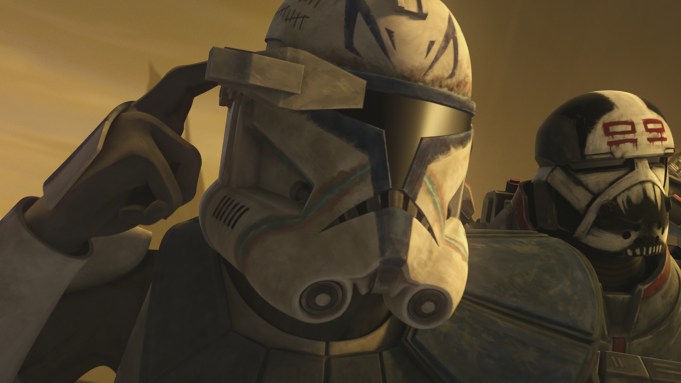 The end is (finally) near for Star Wars: The Clone Wars.  The award-winning animated saga returns for its finale season this Friday as the franchise makes the jump to Disney+, the subscription streaming service that is already home to the live-action Lucasfilm fan-favorite The Mandalorian.

Today, Disney and Lucasfilm released a clip (found above) from the season premiere, an adventure titled The Bad Batch.

Star Wars: The Clone Wars aired from 2008-2013 and its sprawling saga and cutting-edge animation earned multiple Emmys and the high-regard of fans, which led to a  considerable grassroots campaign to revive the show to give the preamble epic the big finish it deserves.

Supervising Director Dave Filoni returns at the helm of the series. Filoni is also the executive producer of The Mandalorian who also directed that show’s premiere episode (which served as the centerpiece offering for the Disney+ launch in December).

The official synopsis for the final season: “It’s the end of the historic Clone Wars, as the forces of darkness have amassed great power in their bid to transform the Republic into the Galactic Empire. With the Republic on a losing streak, Captain Rex fears the Separatists are using stolen data to help predict the Grand Army’s every move. As the threat of defeat looms, Rex teams up with experimental Clone Force 99, also known as the Bad Batch. Together, they embark on a high-risk mission behind enemy lines to uncover the truth behind the Separatist victories.