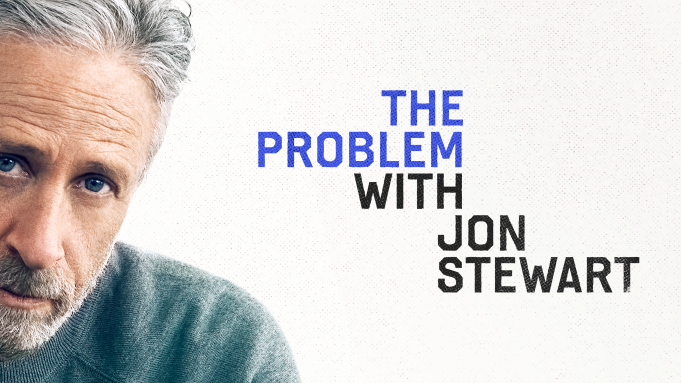 In the six years since Stewart last hosted The Daily Show, the world has undergone seismic changes: there’s been the presidency of Donald Trump, a pandemic, Black Lives Matter and #MeToo.

Accordingly, the snippets from comedian’s new project seem to reveal a more somber Stewart, addressing serious issues seriously with punctuations of his trademark humor. Apple said the show will “tackle ongoing national conversations that have domestic and global impact.”

The Problem With Jon Stewart debuts globally on Apple TV+, Thursday, September 30. New episodes will drop every other week. The project also includes a companion podcast, which will be launched the same day and have new episodes every week.

The term “first look” is being used loosely here, as the streamer has already released a teaser trailer for the show and a timely spoof on Jeff Bezos’ trip into space. But, for Stewart fans, any new look at the show is a good one.

Apple describes the series series as an exploration of “complex topics through the differing perspectives of stakeholders, experts and individuals confronting these challenges.” It says the podcast will “expand upon the conversation from each episode, featuring staff members from across the show who will have conversations with activists in the space, share facts on the issue, and of course, bring plenty of jokes.”

The Problem With Jon Stewart will be hosted and executive produced by Stewart through his Busboy Productions. It is part of his multi-year partnership with Apple TV+.

The series is executive produced by showrunner Brinda Adhikari, alongside Stewart’s longtime manager James Dixon, and Richard Plepler through his Eden Productions, which has an exclusive overall production deal with Apple. Chris McShane is co-executive producer, Lorrie Baranek is supervising producer and Chelsea Devantez is head writer.