Continue to Deadline SKIP AD
You will be redirected back to your article in seconds
Skip to main content
March 10, 2020 4:07pm
8Comments 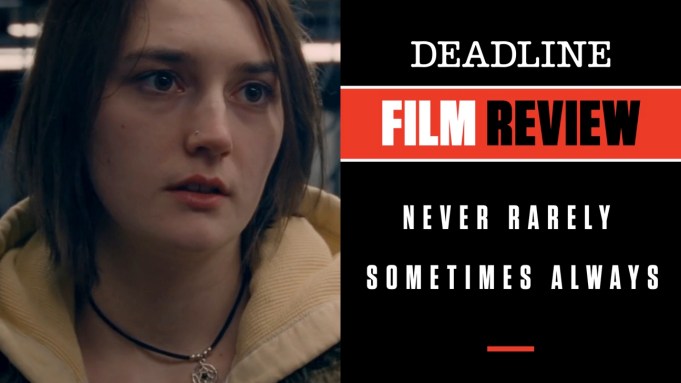 Recent winner of the Silver Bear at the Berlin Film Festival as well as Special Jury Prize at Sundance, writer-director Eliza Hittman’s beautifully observed film of two young girls traveling to New York City so one of them can get an abortion is deserving of every accolade coming its way. Quiet, authentic and achingly real, this modest, independently made story of female friendship under trying circumstances marks the coming of age of Hittman (Beach Rats), as well as her young stars who are, in a word, astonishing.

Don’t let the title put you off. Its four seemingly disconnected words are very apparent in a devastating abortion clinic scene in which Autumn (exquisitely played by first-timer Sidney Flanigan) must submit to a bruising set of questions posed by a compassionate administrator. You won’t soon forget the title of this film after seeing that scene, or the nearly wordless and heartbreaking responses from Autumn. The film, which starts off innocuously enough with a school talent show, soon shows its stripes as Autumn becomes alarmed over an increasingly visible baby bump. Living in a small Pennsylvania town, she is unable to get an abortion without parental consent but doesn’t dare bring this information to her parents (Sharon Van Etten, Ryan Eggold). So what to do?

After briefly taking matters into her own hands in a primitive and gut-wrenching way, she convinces her cousin Skylar (Talia Ryder) to accompany her on a one-day trip to NYC in order to get the abortion without anyone else knowing (including the father, who’s never seen or heard from in this film). After they board a bus, the film really shows what it is all about — a story of friendship and trust between these two who work together in a sleazy supermarket most days. Getting the money for the trip by sliding some tens from the register, Skylar is a tower of strength for the much more restrained and often quiet Autumn. Hittman uses long takes and close-ups to show the situation this young woman finds herself in, seemingly unable to realistically come to grips with it in any way other than to try and get rid of the problem as best she can. What she doesn’t count on is going through the bureaucracy of the American health care system.

But this movie isn’t a polemic on the hot-button issue of abortion; rather, it shows the process it takes, and in Autumn’s case, that means at the 18-week mark in the pregnancy. It’s more complicated than they thought, so she and Skylar are forced to lug their suitcases around in search of a place to stay, and also to get money for the trip back home after the procedure. A young man (Theodore Pellerin) they met on the bus becomes the answer to that problem, but it requires some flirtation on Skylar’s part. Men don’t necessarily come off well here, nor should they, but the focus is squarely on Autumn and Skylar, and the two newcomers who play them are simply unforgettable. These are not easy parts to pull off, but casting clearly was crucial and these two are exceptional, as is Hittman’s truly impressive work behind the camera.

The quality of this film should not come as a surprise as Adele Romanski, who won a Best Picture Oscar for Moonlight, is one of its producers, and that film’s Oscar-winning writer-director Barry Jenkins serves as an executive producer. The same attributes that made Moonlight so memorable also are on view here — a very moving and sensitive story with its focus squarely on human beings. Focus Features opens it in limited release on Friday. Check out my video review with scenes from the film at the link above.

Do you plan to see Never Rarely Sometimes Always? Let us know what you think.