Continue to Deadline SKIP AD
You will be redirected back to your article in seconds
Skip to main content
February 24, 2021 3:52pm 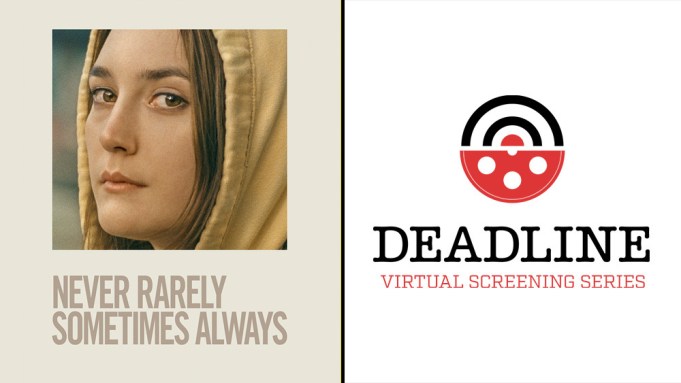 Written and directed by Eliza Hittman,  Never Rarely Sometimes Always is a quiet, yet powerful movie that has been leaving its mark on awards season. The Focus Features drama has been receiving plenty acclaim from critics circles and was nominated for numerous Spirit Awards including Best Screenplay, Best Feature, Best Female Lead and Supporting Female. Hittman and actors Sidney Flanigan and Talia spoke about the journey of the film and its importance during a Q&A at Deadline’s Virtual Screening Series.

The film follows Autumn (Flanigan) who is faced with an unintended pregnancy. After she gets no support from her own community in rural Pennsylvania, she and her cousin Skylar (Ryder) head to New York City so that she can get an abortion.

For Hittman, she is drawn to telling stories that haven’t been told before. More specifically, she gravitates to stories that are taboo and often “repressed and omitted from narratives that we conventionally see about teenagers’ lives.”

“I think that a lot of films that deal with abortion in American film history have been overly-explored by men,” Hittman points out. “They are usually about the excitement, danger of abortion, the back alley of abortion and the danger of the procedure. That’s been mined over and over again — in a way, I was reclaiming the gaze and telling this story that I think a lot of women have been through and buried in their minds and hearts.”

She continued, “The conversation we are having in this country is that women and people with uteruses need access and care and that care needs to be affordable and in their town… nobody should have to take a bus 200 miles to get to an abortion clinic.”

For the most part, Flanigan put her own experiences in the character of Autumn. “I wasn’t sure what really to do seeing that I had no experience acting before,” she said. “All I thought about is what I have to offer in my own experiences.”

In regards to being Autumn’s only source of support, Ryder said, “If it were the same situation in my own life, I think I would do the things and go to the lengths that Skylar went through to protect her cousin…I never really had to think about how far I would go until playing Skylar.”

Watch the Q&A above.