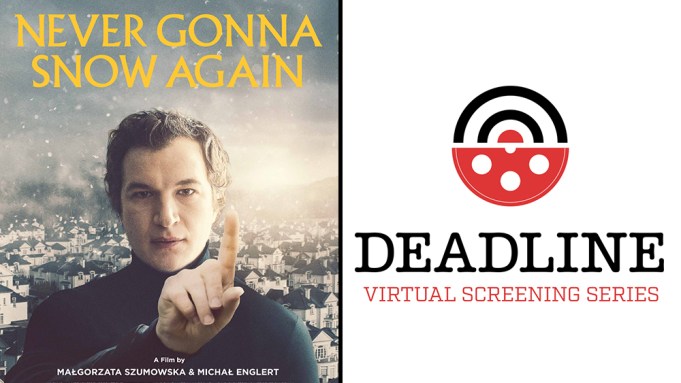 As they tell Deadline, their partnership was initially a romantic one, and the pair are ex-husband and wife as well as a directing team. However, if anything that unusual dynamic has served to improve their professional collaboration, which they tell us has ultimately proven to be “the stronger marriage.”

The story of Never Gonna Snow Again was inspired by a masseur friend of theirs, they explain, and while the personality of the film’s protagonist may be entirely invented, the duo were intrigued by the idea of using a camera to explore the story of a foreigner entering a wealthy middle-upper class community and influencing the residents’ lives. Szumowska and Englert’s background growing up in Poland under Soviet rule, and also in relatively close proximity to the Chernobyl nuclear disaster, also influenced the project.

The film stars Alec Utgoff, who many will have seen in Netflix’s Stranger Things, and the wider cast also features Agata Kulesza, who was in the Polish International Oscar-winning movie Ida. Szumowska’s son first identified Utgoff after the filmmaker said she was looking for a Russian-speaking actor for the role. Utgoff was initially reluctant, saying he wasn’t interested in art house Polish films, but Szumowska was determined to convince him and was ultimately successful.

The actor was used to working on big-budget TV and films, such as Mission: Impossible – Rogue Nation, and the indie process was a culture shock for him, the filmmakers say, but he rose to every challenge. “He had so many skills, it would’ve been a shame not to use them all,” adds Englert on the fluid nature of the production, which saw Utgoff tasked with ballet dancing and playing the piano.

The filmmakers say they were attempting to make a feature that called back to the “metaphysical, spiritual films of the past” but with added black humor. “We knew it was risky to make a film that is so full of poetry, and is enigmatic. We are happy the story works on some types of people,” says Szumowska.

Watch the video above from Deadline’s conversation with Malgorzata and Michal (stick around until the end for a surprise).