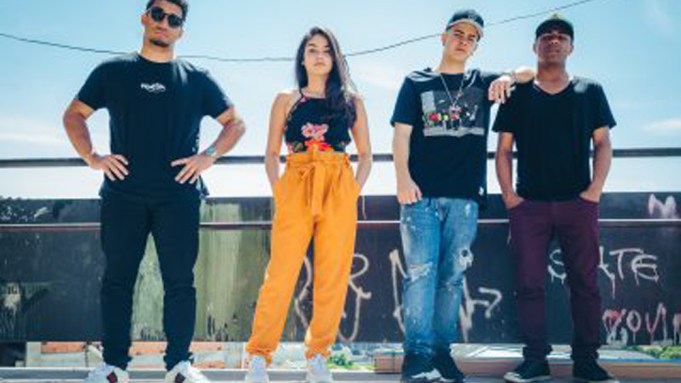 Netflix is to launch its Brazilian coming-of-age drama Sintonia from YouTube sensation KondZilla on August 9. The SVOD service has just unveiled the first trailer for the series (above).

The drama explores the links between music, drug trafficking and religion in Sao Paulo. It follows three childhood friends Nando (Christian Malheiros), Doni (MC Jottapê) and Rita (Bruna Mascarenhas), born and raised in the outskirts of São Paulo, in pursuit of their dreams. But nothing is easy in the favela, and at any moment everything can change.

Doni, Nando, and Rita all grew up together in the same favela, where they were influenced by the draw of funk, drug trafficking, and the evangelical church. Despite them following very different paths, the three childhood friends ultimately realize that to achieve their dreams, they’ll need to rely on and support each other throughout this journey.

Sintonia was created by KondZilla, a music video director and producer who has close to 30M YouTube followers, in partnership with Guilherme Quintella and Felipe Braga.

Produced by ICM-repped Losbragas, the Brazilian production company behind sitcom Samantha!, Sintonia will feature six 40-minute episodes in its first season. It was written by Guilherme Quintella, Duda Almeida and Thays Berbe with Pedro Furtado as the head-writer. The producers are Rita Moraes, Felipe Braga, and Alice Braga. Felipe Braga also serves as the creative executive-producer. Directed by Johnny Araújo and Kondzilla.

It is the latest Brazilian original for the SVOD service following the launch of 3%, O Mecanismo, Super Drags, Coisa Mais Linda, The Chosen One and upcoming titles such as Invisible Cities, Nobody’s Looking, Brotherhood, Omniscient, Spectros, Futebol, Reality Z and Boca a Boca.