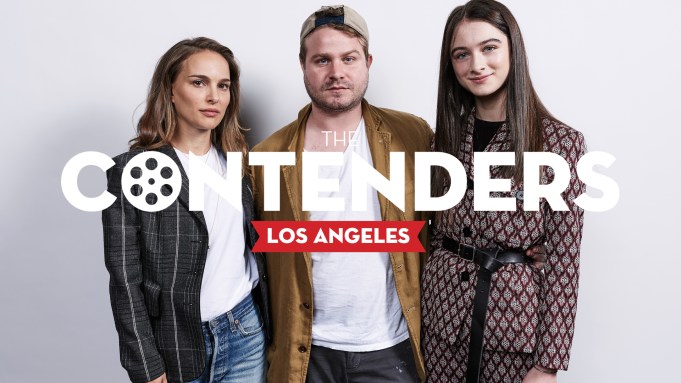 When Black Swan Oscar winner Natalie Portman takes on a complex character, she submerges herself in every detail of her alter ego. With writer-director Brady Corbet’s Vox Lux, she plays Celeste, the survivor of a high school shooting who is ultimately transformed into a tough-talking pop star, and whose image provokes many of the evils of which young Celeste was a victim.

“You have a character that sort of acts as an avatar to represent the defining cultural moments of our era,” Corbet said during Deadline’s The Contenders Los Angeles awards-season event, saying that Vox Lux is about America’s loss of innocence.

In prepping for the role, Portman absorbed all the pop feature documentaries out there, and stole details from each one, not basing Celeste off any specific performer — though Sia was involved heavily in the movie’s songs, and many critics have pointed to Katy Perry and Lady Gaga. Portman also prepared rigorously with her choreographer-husband, Benjamin Millepied.

English actress Raffey Cassidy plays dual roles in Vox Lux as the young Celeste, who after being injured writes an innocent pop song that becomes an anthem for a generation before she’s tainted by fame. Cassidy shows up again during the second half of the movie playing Celeste’s daughter, who has become a casualty of her mother’s success.

Neon took U.S. distribution rights to Vox Lux out of the Toronto Film Festival and through four weeks of limited release in under 350 screens recently, the pic counts $700,000 at the domestic box office.