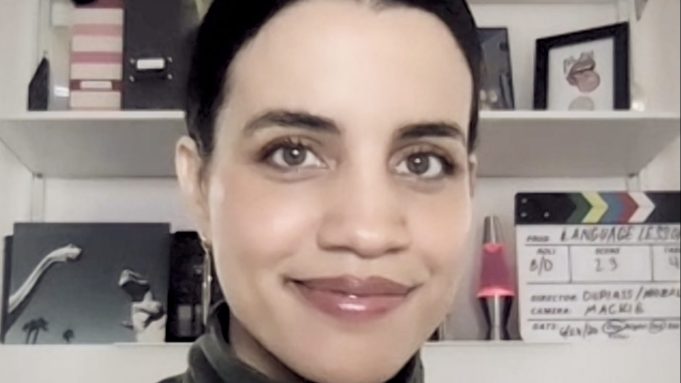 Despite all of the challenges that have come with the Covid-19 pandemic, 2020 was a productive year for Natalie Morales.

While appearing on screen in Netflix dark comedy Dead to Me and more, the actress also directed her first two features, Language Lessons and Plan B. The former title, which she also co-wrote and executive produced, premieres at the South by Southwest Film Festival today.

“It was this crazy thing where I somehow made these two movies within like four months of each other, not intentionally at all, and they are also so incredibly different from each other,” Morales said, in an appearance at Deadline’s virtual SXSW Studio. “But I love them both, and they’re both such a big part of me.”

If the pandemic hadn’t happened, Morales said, the festival title would not have been made—at least not this year. But when the plug was pulled on Plan B a day ahead of its shoot, she adjusted quickly, diving deep into work on Language Lessons with fellow co-writer, EP and star Mark Duplass.

Produced by Duplass Brothers Productions, the intimate two-hander centers on Cariño (Morales) and Adam (Duplass), a Spanish teacher and her student, who develop a bond over Zoom that’s deeper than either would have anticipated. The first seed of the idea came from Duplass, who began taking virtual Spanish lessons, shortly after the pandemic first shuttered production. “It was just a really interesting dynamic where I’m not that great at small talk. So, we were supposed to be practicing, and I noticed that our conversations would go a little deeper than they normally would, more quickly. And I thought, ‘Well, that’s interesting,’” he said, in conversation with Morales. “The 2D connection on Zoom is supposed to mean that it takes longer to get to know someone, but in this instance, we’re moving more quickly.”

Referred to by Duplass as a “platonic love story,” Language Lessons’ storyline emerged organically through extended conversations with Morales, with each collaborator writing the dialogue for their own character.

While full of seamless comedic banter, the film also has its fair share of weighty dramatic material. Naturally, it was penned, bearing in mind losses each collaborator experienced in the time of Covid.

“The name Cariño, or Caridad was inspired by a longtime family friend of mine who…died of Covid,” Morales shared. “Actually, she hadn’t died at that point. [But] she was sick with Covid, and she was on my brain.”

“The format allowed for some sort of organic evolution from what we were dealing with in our lives, and there was so much death around us, not only with the Covid stuff,” Duplass added. “It was right around the time when my friend Lynn Shelton had just passed away, and we were dealing with that, figuring out how to grieve across screens and connect.”

Prior to Language Lessons, Morales had directed music videos and episodic TV, in between high-profile acting jobs. While she had been writing scripts even before she went to college, and wanted to direct features for years, she didn’t start out in her career, believing that it would be possible to fulfill that dream.

“I think for a long time, before I started acting, people told me that that wasn’t possible as a career. Then, when I started acting, they were like, ‘You’re just an actor, sorry.’ So, I didn’t ever consider it as an actual possibility,” she said. “When I started writing scripts, luckily, I did have some writer friends who didn’t have that bias. But [with] some other people that I knew that were writers…I wasn’t encouraged, I’ll say that.”

The tide began to turn, in this respect, when Morales was invited by Duplass to direct two episodes of Room 104, the HBO anthology series he created with brother Jay. When the executive producer brought Morales onto the show in 2018, as an actress in episode “A Nightmare,” he immediately felt a kinship with her, recognizing a talent that should be supported.

“It was so obvious to me she was a fully formed creator when I met her,” said Duplass. “It was just a question of having the space to do it.”

With Covid precautions in place, Morales was able to circle back following Language Lessons, shooting Plan B in September. The feature will debut on Hulu this year.

Looking to the future, Morales wants to continue to direct, though she’s not exactly sure what kind of project she’ll be tackling next. “I think that’s really exciting to me,” she said, “and I think if there’s a goal for me, it’s to do things I haven’t seen before.”

Meanwhile, for Duplass, there are two docuseries to promote, those being The Lady and the Dale, which is currently streaming on HBO Max, and Hulu’s Sasquatch. On the acting side, he is currently at work on Season 2 of Apple TV+’s hit drama, The Morning Show.

Language Lessons premieres at SXSW today at 10 a.m. PT. For more from our conversation with Morales and Duplass, check out the video above.