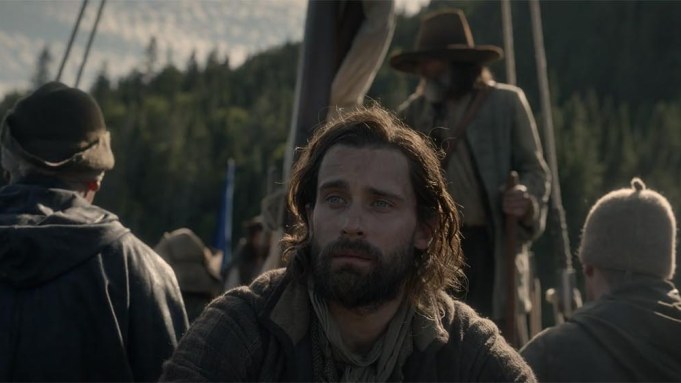 EXCLUSIVE: In another example of deepening integration between Disney divisions, Barkskins will become the first new National Geographic series to get a next-day release on Hulu.

The historical fiction limited series, created by Elwood Reid, is sprinting in the final stretch to the screen. Ten days ago, Nat Geo announced that the period drama will debut on Memorial Day, May 25, taking over the slot vacated by Genius: Aretha, whose production had been suspended over the coronavirus pandemic. With the premiere only a month ago, Nat Geo today is releasing the first trailer for Barkskins, which will air during the NFL Draft on Saturday on fellow corporate siblings ABC and ESPN as well as NFL Network.

To give the premiere of Barkskins a boost, Nat Geo will use a special presentation of the similarly themed Leonardo DiCaprio starrer The Revenant, from another Disney division, 20th Century, as a lead-in. Both Barkskins and The Revenant explore survival in an uncharted world.

Genius: Aretha was one of over 70 shows across National Geographic channels whose production was halted last month because of the pandemic.

“With Barkskins, we were so fortunate to be wrapping up post-production on the show just as the global crisis unfolded,”  said Carolyn Bernstein, EVP, global scripted content & documentary films, National Geographic. “We had a wildly entertaining, visually arresting, premium scripted limited series from the immensely talented showrunner Elwood Reid and legendary producer Scott Rudin essentially ready to broadcast.”

Still, when Genius: Aretha‘s planned May 25 debut had to be postponed, it was not an automatic decision to slide Barkskins into that slot. Genius: Aretha was following a marketing campaign which had started months ago, releasing carefully timed first-look photos. Barkskins had no awareness, and Nat Geo had a little more than a month to bring it to air and promote it amid a health crisis, with most of America staying home.

“We debated bringing it to air and marketing the series during the stay at home order and ultimately embraced this unique opportunity to get Barkskins in front of a broader audience while people are home and actively looking for distinctive new content to watch,” Bernstein said.

The eight-episode Barkskins, based on the bestselling novel by Annie Proulx, will air with back-to-back episodes for four weeks. With an ensemble cast led by David Thewlis and Marcia Gay Harden, the series examines the mysterious massacre of settlers in the vast and unforgiving wilds of 1690s New France that threatens to throw the region into all-out war. It is set in Wobik, a small settlement in what is now the Canadian province of Quebec.

While it was not impacted by coronavirus, the Barkskins shoot was not without challenges. “We shot in the woods in Quebec. We had Biblical swarms of mosquitoes, gnats and horseflies,” said creator Reid, who serves as executive producer and showrunner.

More than three centuries after the events in Barkskins, its message remains relevant, Reid believes.

“I’d like to say the tidepool of humanity has progressed but it has not,” he said. “Our drive to prosper at the expense of others is internal and hard-wired and just as true in 1670’s New France as it is today.  All empires are built on the blood of dreamers. Barkskins is about how that blood gets spilled.”

Reid’s pitch to people staying at home and looking for something compelling to watch during quarantine —  “Folks in the woods with axes — what could possibly be boring about that?”

The deal forges a closer relationship between Disney-owned Nat Geo and Disney-controlled Hulu. Nat Geo already is one of the main brands on Disney’s other entertainment streaming service, Disney+.

The Revenant stars DiCaprio as a frontiersman on a fur trading expedition in the 1820s who fights for survival after being mauled by a bear and left for dead by members of his own hunting team.