Continue to Deadline SKIP AD
You will be redirected back to your article in seconds
Skip to main content
February 13, 2020 3:21pm 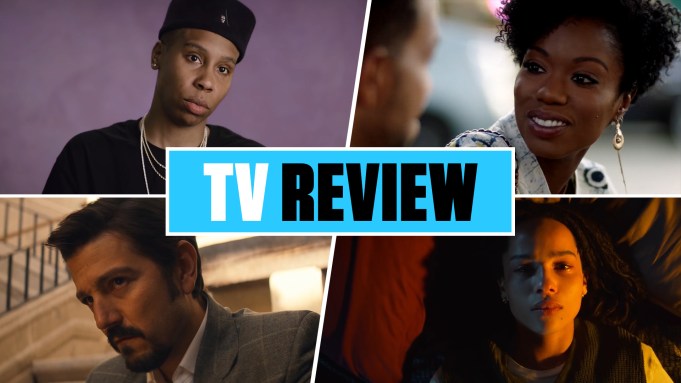 On the eve of Valentine’s Day, there is a lot of love in the air and on the small screen this week, in many forms. As my TV review above displays, there was the debut of the Ava DuVernay created Cherish the Day on OWN on February 11, and the launch of the bloody second season of Narcos: Mexico on Netflix today. Then coming on Valentine’s Day itself is the latest adaptation of High Fidelity premiering tomorrow on Hulu, and the five-part LGBTQ docuseries Visible: Out on Television on Apple TV+.

Which one will be the show you have to watch this week as you smell the roses and devour those chocolates from your beloved/ Well (and I apologize in advance for my ruptured voice), you’ll have to click on the video to find out for your watch and chill, if you know what I mean?

The newest offering on Oprah’s outlet, from the Emmy- and Oscar-nominated DuVernay, Cherish the Day stars Xosha Roquemore and Alano Miller as an opposites-of-sorts couple trying to find their way through the flush of new love and the relationship that emerges. With each episode of the City of Angels-set eight-part anthology series focusing on a single day over a five-year span, the Mindy Project and Underground alums are joined by the award-winning and Presidential Medal of Freedom recipient Cicely Tyson.

Debuting earlier this week and produced for OWN by DuVernay’s ARRAY Filmworks and Harpo Films in association with Warner Horizon Scripted Television, the full gender-parity-achieving CTD takes its title from Sade’s sultry 1992 song, which tells you a lot about what is going to go down here.

Picking up not long after the murder of the Michael Peña-portrayed DEA agent by the order of the Diego Luna’s Miguel Ángel Félix Gallardo, leader of the Guadalajara Cartel, the second season of Narcos: Mexico features vengeance drenched on all sides. Having been the almost unseen narrator of the 2018 first season, Scott McNairy is now very much on screen in Season 2 of the Netflix series.

Actually, in what is the fifth season overall of Narcos, now showrun by Eric Newman, the Halt & Catch Fire alum is a DEA official willing to break as many rules as the Mexican cartels to avenge the death of Peña’s character. With some timely references to the Iran Contra scandal, this 1980s-set drama meticulously lays down the origins of the drug money-fueled chaos and violence that has overtaken our neighbor to the south.

Directed by The Case Against 8‘s Ryan White and executive produced by White, Jessica Hargrave, Wanda Sykes and Wilson Cruz, Visible: Out on Television is something new for the new-ish Apple TV+. With narration from Janet Mock, Margaret Cho, Asia Kate Dillon, Neil Patrick Harris and Lena Waithe, the docuseries looks at the evolution, revolution and representation of our LGBTQ brothers and sisters on the small screen.

Plus, as a day of love looms, the five-part Visible has more big names that most Oscars, Emmys and Olympics put together, which tells you a lot about the scope of the series and its topics.

High Fidelity started as a novel from Nick Hornby in 1995, then hit the big screen as a romantic comedy starring John Cusack and Lisa Bonet in 2000 and a Broadway musical in 2006. High Fidelity the series is now on Hulu beginning on Valentine’s Day with some flips from the original. The series on the Disney-owned streamer moves to the republic of Brooklyn, with Zoë Kravitz as the romantically striving and challenged record store owner trying to figure out where it all went wrong.

So, as I’ve said before, which one is the show you have to watch? You can send all the flowers and sweeties you want, but you’ll have to watch the video to find out