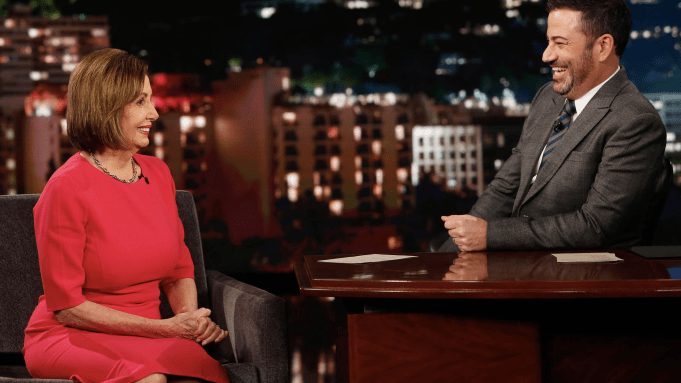 Kimmel, who introduced Pelosi as “The warrior from the Golden State”

“I think the president wants us to impeach him,” said Pelosi, who Kimmel introduced to his audience as “the warrior from the Golden State.”

“He knows it’s not a good idea to be impeached,” she said. “But the silver lining is he believes he would be exonerated by the U.S. Senate.” His school of thought, Pelosi explained, is that,  the Senate acquits, he would not be able to be prosecuted in the private sector.

“Because the Senate leans Republican,” Kimmel added, explaining to his viewers.

“Not ‘leans’,” she corrected. “Completely in the pocket of Donald Trump.”

“You think those Republicans senators, even if they know he committed a crime, will side with Donald Trump?” Kimmel asked.

“They have every day,” she responded.

Pelosi said she’s “done with him” and wants to talk to Trump about rebuilding the country’s infrastructure “and not have him stomp out of the room.” Dems, she campaigned to the crowd, also are focused on affordable health care, lowering the cost of prescription drugs, and saving the pre-existing conditions benefits.

She thanked Kimmel for his fight for universal healthcare.

Kimmel, in turn, made one suggestion to the House Speaker when she next meets with Trump: “bring McNuggets.”