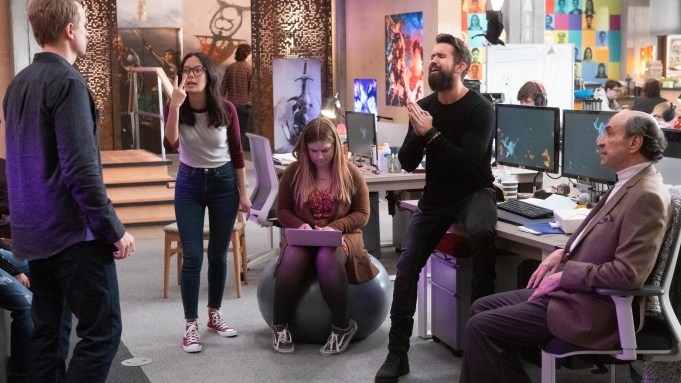 Rob McElhenney has tweeted the first trailer for his upcoming Apple TV comedy Mythic Quest: Raven’s Banquet, and wants the fiercely loyal fans of It’s Always Sunny in Philadelphia to know that his new project with Charlie Day will in no way dim Sunny‘s future.

Or, as McElhenney puts it, “Sunny Always. Always Sunny.”

“Here’s the new show,” tweeted McElhenney, who created Mythic Quest with Megan Ganz and exec produces with Sunny‘s Day (among others). “Charlie Day & I would like to cut the death threats off by saying this will in no way affect Sunny. Sunny Always. Always Sunny. But also @mythic_quest There’s room for both you animals. Enjoy!”

From the looks of the trailer, also released today by Apple TV, Sunny fans should be perfectly willing to embrace the new show. Mythic Quest seems to share the long-running FXX’s series skewed worldview and offbeat humor – at one point, McElhenney’s video game designer character Ian Grimm complains that the watermelon he’s smashing for a special effect doesn’t explode like a human head. Later, he tries to sweet talk a colleague into staying with his company by comparing their partnership to the Beatles. She’s Ringo, of course.

In addition to McElhenney and Day under their RCG banner, exec producers include Michael Rotenberg and Nicholas Frenkel on behalf of 3Arts; and Jason Altman, Danielle Kreinik and Gérard Guillemot for Ubisoft Film & Television. David Hornsby and Megan Ganz  also executive produce. The series is produced by the Lionsgate/3 Arts Entertainment venture and Ubisoft.

All nine half-hour episodes of Mythic Quest will be available Feb. 7 on Apple TV+. Check out the trailer above.