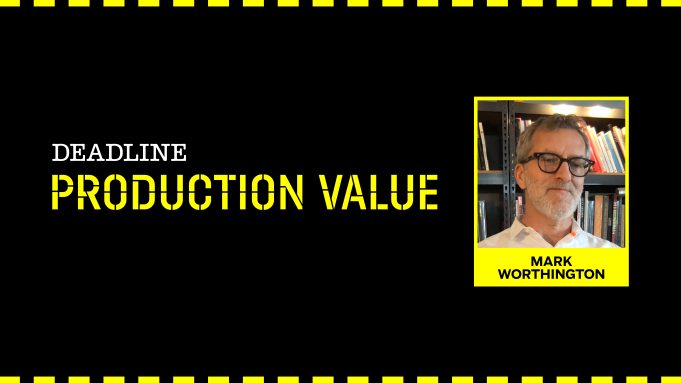 Created by Charlie Day, Megan Ganz and Rob McElhenney of It’s Always Sunny in Philadelphia, the series follows Ian (McElhenney), the owner of an accomplished video game design company, who struggles alongside his employees to keep his hit game on top.

In developing the look of the company’s offices, Worthington of course engaged in an extensive, real-world research process. “The obvious part is, you’re going to look at offices. Since you’re doing a gaming office, you’re going to look at gaming offices,” the eight-time Emmy nominee says, in the latest installment of Deadline’s Production Value video series. “We looked at Ubisoft’s offices in Montreal and also in LA, as a starting place, which are very real—which is kind of what Rob wanted, initially.”

Of course, given the fact that Mythic Quest is a television series—and a comedy, specifically—Worthington couldn’t simply stop at the real. “I also looked at other examples of offices for creative businesses—you know, advertising agencies, fashion and the like—to see what might be a little more visually interesting,” he explains. “So, there’s sort of a mash-up of both the more realistic research that we looked into, and then some of that more stylized, extreme stuff.”

The look of Mythic Quest’s home base was also largely informed by the kinds of characters featured in the show, and the kind of comedy for which McElhenney is known. “These characters work together, but they’re always scrambling to get on top. It’s sort of that typology that [McElhenney] does so well,” the production designer says. “So, he was obsessed with having Ian’s office higher than everybody else’s. But it’s only maybe four and a half, five feet off the ground.”

Initially, McElhenney asked for Ian’s office to be built way up on a second level, far from the peons that worked for him, as a way of reflecting his sense of self-importance. “I was like, ‘You know, it’s impossible to get shots.’ Mike [Berlucchi], the DP and I were like, ‘No, I think it’s better if we sort of come down halfway’—and it worked better that way,” Worthington says. “But the fun thing is that Ian can always look out his window, and every time he looks out, he’s always looking down on the staff.”

On any film or TV production, windows can actually become an obstacle to work around, on a technical level. “One of the things you do with windows is, you do what we call ‘gimbaling’ them. They move, and they pivot, and the reason for that is, they’re very reflective surfaces,” Worthington notes. “They’re like mirrors, and the director of photography wants to be able to shift them slightly, so that he cannot see his camera, and not see the crew in them.”

In any case, on Mythic Quest, one window of Ian’s proved particularly valuable, from a comedic perspective. “It wasn’t something I planned, but it worked out really beautifully. It’s quite small, just like a porthole. Early on, [Rob] was playing around and he pushed on it, and it opened, and he’s like, ‘That’s f**king great! I can use that.’ So, now, he uses it for all these comic bits, where he needs to communicate with somebody outside and say something, or he needs to peek out and look at people,” Worthington shares. “It provides this almost Laugh-In-like opening door thing for the comic bit. So, there are also those sort of happy accidents, where you don’t intend them, but they turn into an ongoing motif.”

From the production designer’s perspective, other key elements in establishing the world of Mythic Quest were the massive supergraphics of gaming characters, plastered on the office walls. And while Ubisoft assisted in designing video game characters and a game world for the show, it was Worthington and his team who were able to bring them to life in a new way. “For example, on the front of Ian’s office, which is this big sort of beechwood veneer wall, with these square windows cut into it, there’s this big supergraphic of a large gaming character, with a big club or a mace, and it becomes his avatar in the show,” the production designer says. “In the same way, Poppy has a big supergraphic on her wall—not as big as Ian’s, of course—but it’s a woman from the gaming thing,”

For Worthington, these visual elements are representative of the kind of stylization he wanted to bring into the show. “Pushing it a little bit is always something I try to do,” he says. “I think using that license actually just makes the show better.”

Starting out as an art director on 1993’s Tombstone, and graduating to production design by 2001, Worthington came into the industry with a longtime interest in film, though his initial love affair was with the theater.

Working on films for the first few years of his career, he found his first opportunity to design for TV in the two-part pilot of J.J. Abrams’ Lost. “The scale of it was like a feature. ABC was a little gobsmacked by the whole thing, because of just, ‘Well, we’ve got to get this plane crash in the jungle, on the beach, and this whole thing in four-and-a-half weeks. And how do we do that?’” he recalls. “It’s like, ‘Well, you’re going to throw some money at it.’ You know, what can I say?”

While Worthington admits that he didn’t initially approach his craft with humility, he’s learned over time that a collaborative spirit is one of the most important qualities, for anyone working in film and TV. “It’s really important to respect people, and listen to people, whether that’s the director, producers who we get into fights with, or can, because it’s all about the money,” he says. “What I realized is, you get much further, in a more positive way, by collaborating with people and respecting them.”

At the same time, as a production designer, it’s crucial to have “the courage of your convictions,” and “a strong point of view,” given the understanding that coming onto any project, the script is just a starting point. “You’re starting with this sense of the story, what they’re trying to communicate, but then what’s really fun, as a designer, [is] you can actually contribute to the narrative,” Worthington says. “The film or the TV show, once it’s shot, it’s edited, that’s the finished product. So, you’re dealing with not necessarily a suggestion, but with something that is not necessarily going to reflect the finished product.”

For Worthington, it’s the ability to have “some authorial effect on the product” that makes the job of a production designer so fulfilling. “You have [that] opportunity, as a designer,” he says, “so it’s not just responding to something and providing something in a kind of workaday world.

“You can do that, but the greater contribution I think you can make has to do with thinking like a writer—not being a writer, not taking that position, but understanding them, and understanding the issues of dramatic writing, and pitching your design ideas to that,” he adds, “and thinking like a director, so that you can actually contribute more, and help make a better object.”

In Worthington’s mind, there’s nothing trivial about the act of storytelling. “One of the most important things we do, as a society, is construct these stories. As a species, I think we’re hardwired to do it. It’s how we define ourselves. In a way, it’s self-description,” the production designer reflects. “You know, we can call it entertainment…[but] that’s really, really powerful, so being part of that, it’s kind of hard to imagine something that’s more fun.

“It has its problems. It’s difficult, all the rest of that,” he adds. “But that is a very fun job, creating those worlds.”

For more from our conversation with Worthington—who also designed the pilot of HBO’s Watchmen, along with series like The Umbrella Academy and American Horror Story—click on the video above.