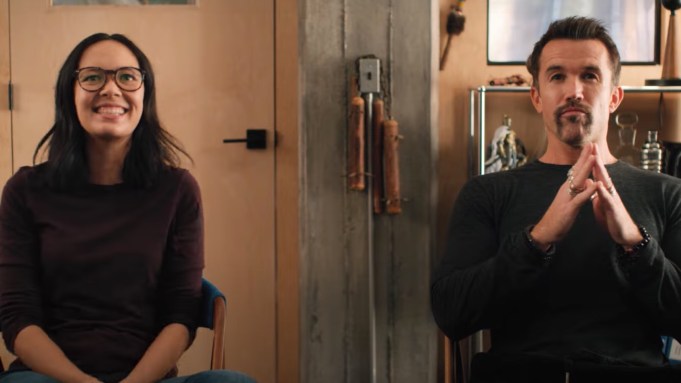 Part of that fresh start for Mythic Quest, both on and off screen, was dealing with the coronavirus pandemic. Shooting at CBS Radford lot in Studio City last fall, the workplace comedy saw numerous positive Covid-19 test results amongst the crew, transmissions and shut downs hamper production of its second season.

“There were just certain realities, we knew when we decided to make the decision to come back,” It’s Always Sunny In Philadelphia’ vet McElhenney admitted during today’s virtual panel. “We knew that nothing is 100% safe and if we were going to make the decision to go back to work, we could do the best we could do, he added. “Unfortunately certain things are just uncontrollable, especially if you’re finding that you can’t police everybody all the time.”

Stating that the process of safely filming during a pandemic was “really, really difficult,” McElhenny said a lot of the problems Mythic Quest encountered were more due to human nature than Covid-19. “We are social animals and because we have a way that we’re used to working and people fall back into those ways, regardless of how many times they are reminded, or we’re all reminded, that we need to keep our face shields down and please stay six feet apart from each other”

Stressing that there was “testing as many times as five times a week” on the 200-person set and extensive safety protocols in place, McElhenney added of the positive test results and halts that “a lot of this was really unfortunate and we were just doing our best.”

“It was very reassuring,” co-star F. Murray Abraham noted of the protocols, which for the 81-year old Oscar winner were obviously essential.

Facing backlash late last year for perhaps going back into production too soon for its second season,  earlier in 2020 Mythic Quest actually was one of the first shows to incorporate the pandemic into its narrative. On May 22 last year, the series dropped a special Covid-19 episode, written, filmed and edited in quarantine. Diving into the frustrations and freedoms of working from home, the episode was entirely shot on iPhones, as one would expect of an AppleTV+ production

Friday’s panel also announced that the sophomore season of the McElhenney, Charlie Day and Megan Ganz created workplace comedy will debut on May 7. As the trailer above makes clear, coming out of quarantine from the coronavirus and trying to revitalize the video game studio, things are chaotic, to put it mildly, for the Mythic Quest team – or, as is said during the trailer “I miss remote working.”

EP McElhenney, Nicdao and and Abraham were joined on today’s panel by co-stars David Hornsbyas well as executive producer Ganz.

Renewed for a second run ahead of its Season 1 premiere last year, Mythic Quest is executive produced by  It’s Always Sunny In Philadelphia’s McElhenney and Day under their RCG banner; Michael Rotenberg and Nicholas Frenkel of 3Arts; and Jason Altman, Danielle Kreinik and Gérard Guillemot for Ubisoft Film & Television. Hornsby and Ganz also executive produce. The series is produced by the Lionsgate, 3 Arts Entertainment and Ubisoft.