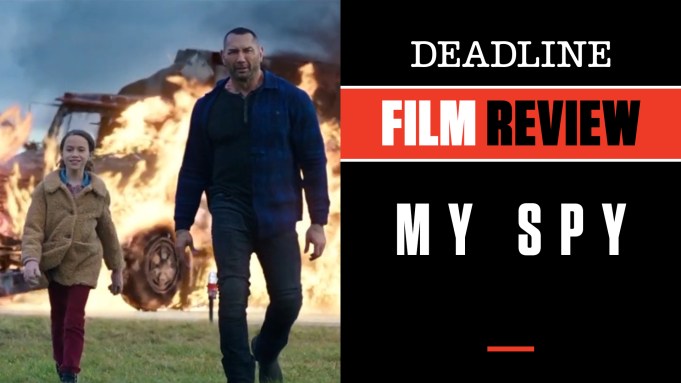 It is almost a rite of passage for action stars, at least ever since Arnold Schwarzenegger went at it with the wee ones in Kindergarten Cop, followed by the likes of Dwayne “The Rock” Johnson with Tooth Fairy and Game Plan, Vin Diesel with The Pacifier and Jon Cena in Playing with Fire, to name a few.

So it was only a matter of time before Dave Bautista teamed up with a tyke, and that he has done in the agreeable family offering, My Spy. This movie has had a bit of a rough ride finally getting seen; the original distributor originally had it slated last summer, then it moved to spring, then pinned on the mat by the coronavirus pandemic and finally shipped off to Amazon Prime, where it debuts Friday.

My Spy deserves better than that kind of shuffle, even if the premise of teaming a tough guy with a smart-as-a-whip kid is a tired one. Thanks to some nice underplaying by Bautista as a frustrated CIA operative demoted due to his penchant for using his fist rather than his computer, and the sprightly Chloe Coleman as young Sophie who basically has him wrapped around her little finger.

The film opens in typical action-movie fashion as Bautista’s hard-nosed CIA agent J.J. kills off a group of terrorists before getting the valuable info the agency wanted. Called into headquarters by his boss (Ken Jeong), he is upset when he learns he basically is being taken off his beat, teamed with a cyber-expert partner named Bobbi (Kristen Schaal) and told he now will be doing surveillance work with her in an apartment building.

So off J.J. goes to this new gig with his pet fish, Blueberry. In no time Sophie, who lives next door with her dog and her mother Kate (Parisa Fitz-Henley) — the ex of one of the wanted terrorists J.J. was after at the start — has his number and figures out they are bugged. Blackmailing him by agreeing not to rat him and his operation out, she cajoles him into teaching her all the tricks of the spy trade, and she proves instantly adept. Of course it should come as no secret that Sophie takes to all this like Blueberry does to water.  The oddball coupling of these two will pay off when the bad guys come a-calling, you can be sure.

Directed by Peter Segal (Get Smart) and written by Jon Hoeber and Erich Hoeber (The Meg), My Spy follows a predictable path saved by the engaging chemistry of the pair of “spies” and the fact this is a movie that never feels a need to overdo it. Bautista, in particular, keeps it all real in a serviceable vehicle to show a sweeter side. Coleman thankfully is not cloying and a complete delight, and Schaal is a hoot. There is a sweet subplot where Sophie even attempts matchmaking by trying to set up J.J. her mom.

It all works as far as it goes, and should please families with an Amazon Prime subscription. Producers are Chris Bender, Jonathan Meisner, Gigi Pritzker, Robert Simonds, Jake Weiner, Segal, and Bautista.

Do you plan to see My Spy? Let us know what you think.