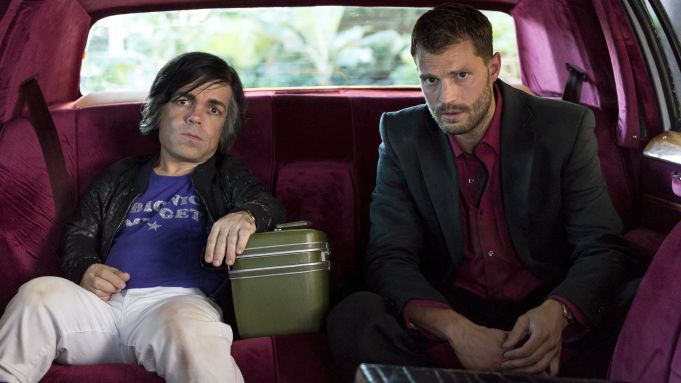 It didn’t take long for emotions to come to the surface at a recent Awardsline screening of My Dinner with Hervé. Seconds into the post-screening Q&A, writer-director Sacha Gervasi broke down in tears sitting next to the film’s stars, Jamie Dornan and Peter Dinklage.

The unique back story of the HBO film explains why. It is based on an all-night interview Gervasi conducted in 1993 with Hervé Villechaize, who is best known for playing Ricardo Montalban’s trusty assistant, Tattoo, on ABC’s Fantasy Island. Gervasi, whose journalism career was then on the ropes, initially treated the assignment as a lark, discovered untapped depths in Villechaize’s complicated life after his subject killed himself soon after the interview.

After delivering a feature profile for a UK magazine, Gervasi turned it into a screenplay, but then experienced two decades of highs and lows before the story made it to the screen. Many of Gervasi’s friends and supporters were among the standing-room-only attendees at the screening at New York’s The Landmark at 57 West.

“I’m quite emotional. It’s been a journey,” Gervasi said, gamely moving past what he described as a “lose-my-sh-t” moment. “I never thought it was going to get made. Watching Peter and Jamie play the scene in the hotel room, that was exactly how it happened. I said to Hervé, ‘I’m glad I stayed’ and he said to me, ‘I don’t feel so alone now.’ It just broke my heart.”

Dornan said the fact his character had a different name (Danny Tate) and an arc that was similar to — but not an exact replica of — Gervasi’s made the shoot easier. “If I had been playing Sacha, I would have been dealing with that every day,” he said, smiling and reassuringly patting the arm of the filmmaker. “Separating it slightly and playing a version of Sacha and trying to depict a version of events that happened between Sacha and Hervé was beneficial for everybody for sanity reasons.”

Both lead actors, given their recent ascent to A-list status, connected with the film’s themes of celebrity and the capriciousness of show business.

“It’s about the abstract notion of fame and what that really is. And it’s nothing but the sum of the parts of what you’ve done in your life. And it has nothing to do with you,” Dinklage said.

Villechaize is shown early in the film displaying a talent for visual art. When the planets align for him to get a highly paid gig as a TV star, he rationalizes that becoming a highly paid actor would be a way to finance life as a painter, invoking the career of Salvador Dali.

“Hervé maybe dived too deep into an abstract notion [of fame] without having some other things to support him. And that can be dangerous,” Dinklage said. “I don’t judge him ever, but perhaps early on he put some things aside. … What a brilliant f–king painter he was. All due respect, Hervé — he was a better painter than he was an actor.”