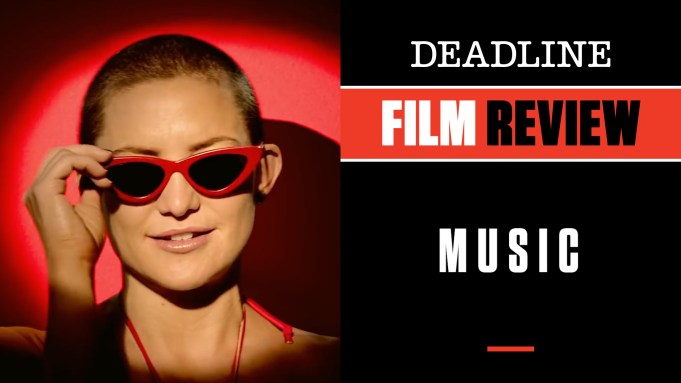 Music somehow was nominated for two Golden Globes last week including Best Picture – Musical/Comedy, but hey guys, everyone makes mistakes. This misguided feature directorial debut from Australian pop singer Sia, the star who’s known for hiding her face, may have had the best of intentions when it was made four (!) years ago, but she should have hidden her film, too, because it is all a bit of a jumbled mess onscreen. Putting the various controversies involving its depiction of autism aside, this movie’s schizophrenic swings between straight drama and disconnected musical numbers are so off-balance that it is hard to take it seriously at all.

Sia, co-writing the script with Dallas Clayton, initially intended this to be a dramatic vehicle, sans songs, about a recovering-alcoholic drug dealer named Zu (Kate Hudson, with head shaved) who begrudgingly becomes guardian to her deeply autistic half-sister, Music (Maddie Ziegler), after her dedicated mother Millie (Mary Kay Place) suddenly drops dead. But apparently Warner Music (Sia’s label), whose logo appears in front of the film, realized correctly that she is no David Fincher and gave her an additional $10 million to throw 10 original songs into the mix, thus making it more commercial with a new Sia soundtrack to help awareness. The result is a series of brightly colored and costumed musical numbers, essentially music videos, dropped into the movie every few minutes that manage to stop cold whatever narrative it had going. They all look like cotton candy confections supposedly meant to represent the inner spirit of the title character, who actually has no semblance of being on the spectrum in these musical interludes that consist of one familiar-sounding pop song after another, and all completely forgettable.

Plotwise, rather than giving any depth to the plight of Music herself, the emphasis is on Zu and her struggles to get her act together as she takes on new responsibilities in her life caring for her sibling and engages in a new romantic relationship with Ebo (Leslie Odom Jr.), a man she meets who, as we find out, has past problems of his own. There also is a subplot involving young boxer Felix (Beto Calvillo), but that’s all a distraction here. Familiar faces pop up here and there with a credit list that includes Ben Schwartz, Hector Elizondo, Tig Notaro, Juliette Lewis, etc., but they are in and out of the film so fast I would be hard-pressed to say if some were in it at all.

As previously reported, many in the autism community were upset after the trailer dropped, and a petition with 18,000 signatures that begged Sia to withdraw the film from its release is out there somewhere. After first being combative online in response, Sia recently relented with a mea culpa that scenes showing restraints on the character were wrong and would be excised in future cuts.

But overall, Music is completely overdone and, in many ways, sunk by handing the role to the inexperienced Ziegler, about 14 at the time this was filmed in 2017. She was a dancer in many of Sia’s videos and saddled with a character she just can’t pull off, instead offering a one-note, one-expression performance of a girl who only relates to the tunes she hears through her headphones. This is a subject that does deserve serious handling but, sadly, only haphazardly gets it from its filmmaker. Blame should probably go to Sia rather than her game cast — including Hudson, who also landed a Golden Globe nomination somehow — probably just for surviving this thing with some amount of dignity still intact. Odom probably hopes people go see One Night In Miami instead.

The film, long on the shelf, finally gets unleashed Wednesday in a special one-night Imax engagement. The idea of seeing this train wreck on the largest screen format imaginable is migraine-inducing, but that is the plan wherever Imax theaters are open currently (Imax Entertainment is listed among the production entities). Vertical Entertainment releases the film Friday on VOD.

Check out my video review above with scenes from the film, which is produced by Vincent Landay and Sia. Do you plan to see Music? Let us know what you think.