Continue to Deadline SKIP AD
You will be redirected back to your article in seconds
Skip to main content
September 3, 2020 8:59am 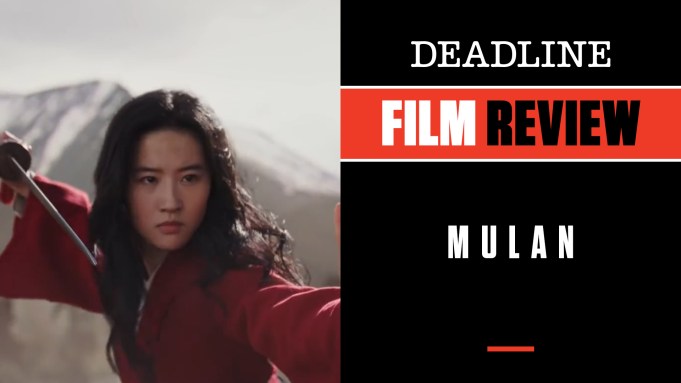 It may not have the songs or much of the comedy of Disney’s 1998 animated hit, but Mulan, the studio’s live-action retelling of the tale of female empowerment and triumph, gets the point across in its own way. Rather than a straight-on remake like many of the previous Disney live-action reincarnations of its animated library, Mulan seems tailor-made as an epic-like cinematic experience closer in tone to Crouching Tiger, Hidden Dragon (which was released two years later in 2000), than the toon with which it shares a legacy at the Mouse House. In fact, screenwriters Rick Jaffa & Amanda Silver and Lauren Hynek & Elizabeth Martin have in essence gone back to the source material, the 1,500-year-old poem “The Ballad of Mulan,” for their inspiration, and since so much of it deals with the strength and power of the female spirit and the importance of being true to who you are, the fact that its director Niki Caro (Whale Ride, McFarland USA) and cinematographer Mandy Walker (Hidden Figures, Australia) are women gives extra impetus to embrace this version as the real deal.

Ultimately, however, this is a story about the human spirit and rising to the task confronting who you really are before you take on the greater cause of the fight for survival in the service of others. The story told here is essentially the same. Hua Mulan (Yifei Liu) is expected to follow the path of others like her and find a man to marry. She has other ideas as she knows her inner and outer abilities go far beyond what is expected of young women at the time, as a tea party with her mother Li (Rosalind Chao) and other elders hilariously shows. When the Emperor (Jet Li) decrees that each family must send one male to join the Imperial Army in order to defeat northern invaders, Mulan’s father Zhou (Tzi Ma) is unable to participate due to injuries from previous battles. She takes it upon herself to fulfill the Emperor’s orders and disguises herself as a man when she joins the boot camp to prepare for battle. She instantly impresses her male fellow recruits, as well as the unit’s Commander Tung (Donnie Yen), and proves to be the standout, slowly winning the admiration of Honghui (Yoson An), a young man she finds she has to resist attraction to, lest she be found out.

Ultimately, the goal is to defeat the invaders led by chief villain Bori Khan (Jason Scott Lee) and his female cohort Xianniang (Gong Li), the latter a new character and yet another female voice in the tale. The scenes set in the boot camp add a touch of comedy but nothing compared to the animated film, and that is a plus for this version, which feels more authentic and less “Disneyfied.” The action really hits high gear in the film’s most stirring moment when Hua Mulan rides in, her hair no longer tied and now flowing to reveal her true identity for all to see. This, of course, causes some complications but sets up the final act and a hugely satisfying conclusion with a strong message.

Rated PG-13 for intense battle scenes — and there are a few of them — this is a family entertainment that proves well worth waiting for. Originally slated for March release with even a Hollywood premiere back then, it was an early victim of the shutdown of movie theaters. Disney moved the theatrical release several times before finally deciding to go the Disney+ streaming route, with a $29.95 premium charge on top of a Disney+ subscription. That’s still a better deal for families than what it might cost to take the whole brood to a theater.

Still it is a shame, at least for North American audiences, not to experience this on as big a theater screen as possible. Caro, with the aid of Walker and an ace production team, has given this film the immense scope it deserves. But there is no question that, however it will be seen, Mulan is a rich and rewarding experience for the whole family. Liu is an outstanding choice in the title role, and the supporting cast is a who’s who of Chinese cinema (where the movie will be released in theaters later this month).

Another plus is the fine musical score from Harry Gregson-Williams that might not reach the heights of what the late great Jerry Goldsmith supplied for the animated film but still soars. And although the song score has been relegated to the end-credit crawl, Gregson-Williams does pay sly homage to it in his scoring. Christina Aguilera sings a new song, “Loyal Brave True,” which just about sums up the story of Mulan with that title alone as the credits begin to roll, and then does a new and much bigger version of her original 22-year-old hit “Reflection,” followed by a softer treatment beautifully sung in Mandarin by Liu. So if you insist on a song-filled Mulan this time around, you are going to have to sit through the entire end credits to finally get it.

Those credits include producers Chris Bender, Tendo Nagenda, Jason Reed and Jake Weiner. Disney+ begins streaming the film on Friday. Check out my video review with scenes from the film at the link above.

Do you plan to see Mulan ? Let us know what you think.