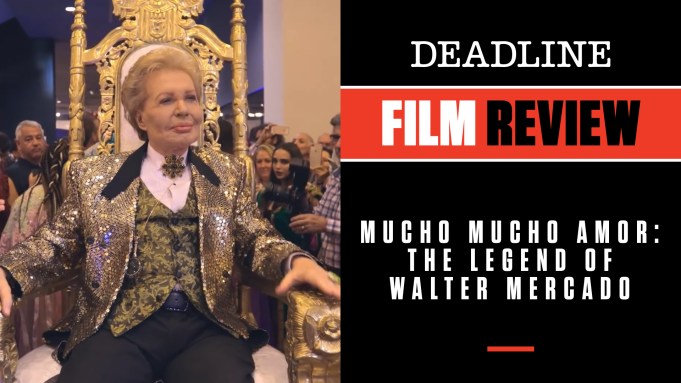 You can see why Netflix became intrigued with the story of the outrageously endearing and flamboyant life of astrologer and TV superstar Walter Mercado because there is much, much to love not only about this unforgettable character but also Mucho Mucho Amor: The Legend of Walter Mercado, the documentary directors Cristina Costantini and Kareem Tabsch weave around him.

After a brief beginning that shows the unlikely success of this Puerto Rican telenovela actor-turned-television phenomenon — who daily gave astrological readings to millions of devoted TV fans while dressed in his elaborately decked-out, over-the-top outfits that make Liberace seem positively conservative by comparison — we see how the unlikely caped icon came about. That includes his seemingly remarkable healing abilities as a young child growing up in the town of Ponce, Puerto Rico, to an early acting career on stage and in telenovelas and then a completely unexpected career that started by accident when filling in briefly on a variety show and coming up with his unique — to say the least — horoscope act.

Mercado’s signature line, “mucho mucho amor,” serves as the title of this engaging and highly entertaining look at a man who served up only encouraging news for his mass following, the equivalent of a human fortune cookie who made it all work because he clearly believed in it all himself. As the upbeat, wonderfully archived docu shows, it led to a cottage industry including merchandising, a massive fan following, spinoffs, and even a telephone hotline populated by his group of personally endorsed psychics. It also led to an association with his manager, Bill Backula, interviewed extensively here, and a six-year legal battle to win back rights to his name and career that essentially became owned by Backula. It was a period in which Mercado could not work in the way to which he was accustomed and was forced to lay low at his garish mansion with devoted assistant Willie Acosta, who really is the man who kept charge of the image, making sure the immaculately blond-coiffed Mercado always kept up the facade.

The filmmakers early on pose the question: “Whatever happened to Walter Mercado?” Then they proceed to answer it with an extensive interview and access into the world of the star, who was in his 80s when this was made and preparing for a big comeback appearance at the opening of a Miami museum exhibition of his life. It is not only a fascinating glimpse into the life of someone who lived and breathed his creation but also a poignant and actually feel-good journey into the story of a legend who clearly made such a difference to young impressionable viewers who waited for his show and astrological readings every day.

One of those viewers was Hamilton creator Lin-Manuel Miranda, who turns up in a sequence in which he is brought to meet the now-aging star. Miranda’s uberfan-like reaction is heartening to see, and the meeting underscores the impact of someone who, on the outside at least, would appear to be a mere showbiz creation but meant so much more to generations of Latino followers. The film also tries to travel beneath the surface, asking questions about his sexuality but never really getting Mercado to reveal much more than the fact he “has sex with everything.”

The most heartwarming and interesting relationship portrayed is the one between him and the ultra-loyal Acosta, clearly one that is platonic but suggesting more what we saw between Norma Desmond, locked up in her vast home and doted on by chauffer Max in Sunset Boulevard. This may be the oddest and most endearing pairing caught on camera since the Mayles docu, Grey Gardens.

A hit at this year’s Sundance Film Festival, Mucho Mucho Amor begins streaming today on Netflix. You gotta see this one, folks. Check out my video review with clips from the film at the link above.

Do you plan to see Mucho Mucho Amor: The Legend of Walter Mercado? Let us know what you think.