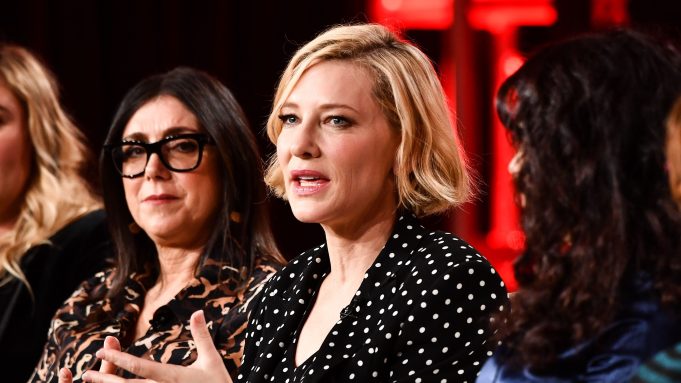 FX on Thursday as part of its day at the TCA winter press tour released the trailer for Mrs. America, the nine-episode limited series that will air on Hulu as part of the network’s new digital hub in the spring.

The true-story series recounts the movement to ratify the Equal Rights Amendment and the unexpected backlash led by Phyllis Schlafly, the beauty queen-turned-conservative crusader being played by two-time Oscar winner Cate Blanchett. Through the eyes of the women of that era, from Schlafly to second-wave feminists Gloria Steinem (Rose Byrne), Betty Friedan (Tracy Ullman), Shirley Chisholm (Uzo Aduba), Bella Abzug (Margo Martindale) and Jill Ruckelshaus (Elizabeth Banks), the series explores how one of the toughest battlegrounds in the culture wars of the 1970s helped give rise to the Moral Majority and forever shift the political landscape.

“You just had the civil rights and paid equity act, so here was another huge change to the Constitution,” said Blanchett today about the series, “It was suddenly a bridge too far for a lot of people about how much change we’re going to tolerate because what’ interesting about the time was that we see a lot of special interest groups use this to push through their platforms about isolation, integration and pro-life.”

“The irony is that everything that Phyllis and the ‘antis’ worried about has come to pass without the equal rights amendment being put in the Constitution,” said the two-time Oscar winner.

Creator Dahvi Waller said that Mrs. America is an “origin story of today’s culture wars — you can draw a direct line from 1970 to today through Phyllis Schlafly and really understand how we became such a divided nation.”

Said Elizabeth Banks who plays former special White House assistant, head of the White House Office of Women’s Programs and feminist activist Jill Ruckelshaus, “I’m really excited that we’re telling the story of these particular women, these are the women who’s shoulders as current feminists we are standing. We get to go to work, and sometimes get equal pay, and control over our bodies..this is what this show is about.”

Mrs. America joins fellow FX newcomer Devs as original series that will premiere on FX on Hulu first along with the Jeff Bridges-starring The Old Man. Mrs. America will kick off the hub’s second phase, premiering its first three episodes on Wednesday, April 15.