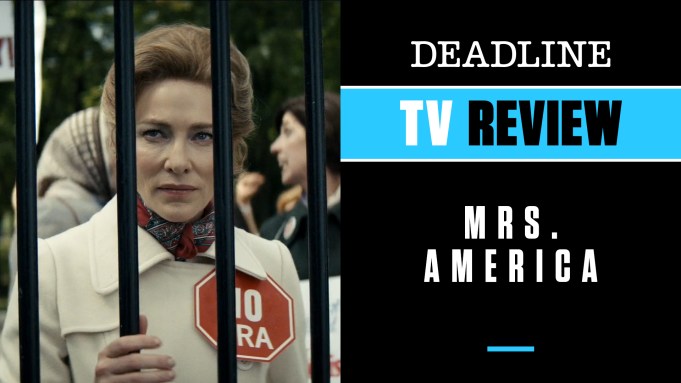 Debuting tomorrow on FX on Hulu, Mrs. America is good, but the crafted saga of the rise and fall of the Equal Rights Amendment could have used a lot more runway to truly take off.

Though I often bemoan the indulgent length of a new series in this Peak TV era, when it comes to the Cate Blanchett-led nine-episode Mrs. America, more would have actually been more. At the end of this story of the Alpha women in the fight and institutional landmines on both sides that hobbled them, it all feels like it whipped by too fast – as you can see in my video review above.

Yet, with resonance for our times, in trying to explain the strategies with strategies and out maneuverings, egos and misogyny inside the political marriages and betrayals of the ERA battle and the rise of far-right Republicans to Presidential power, there is a lot left on the cutting room floor, literally and figuratively. Stunted by a lack of at least three more episodes and some format choices that pull focus towards unrefreshed margins, Mrs. America seems to forget that for most of a 2020 audience the warrior queens of this 1970s cultural war will seem so far off as to be contemporaries of Byzantine era Empress Theodora.

Originally scheduled for the John Landgraf run cabler, late last year Mrs. America was shifted over to Hulu to clearly be a prestige jewel in the crown of the Disney-controlled Hulu, which also houses the excellent Hillary docuseries (see my review here). Premiering on April 15 on the streamer with three episodes, Mrs. America will roll out a new episode every consecutive week in an era that sees the E.R.A. resurrected to some degree in the political arena.

Just under three months ago, Virginia’s state legislature resoundingly passed resolutions backing the Equal Rights Amendment, following similar actions in Nevada and Illinois. However, since the original deadlines for the passage of the Constitutional change expired decades ago, it is unlikely that the symbolically pivotal move by Old Dominion will carry much legal weight in a renewed culture war that has seen much fervor going into this year’s elections.

Still, as Mrs. America triumphantly depicts the blueprints for the immediate conflict back in the day and the long game to follow, there is a bigger picture striving to come out of the FX limited series as it is.

The fact is that with Eagle Forum founder Schlafly (who is rightly portrayed as one of the premier political tacticians of her time, regardless of where your own sympathies lie) as the front women, conservative activists were able to kneecap and ultimately cripple the E.R.A. In our divided time, it is telling that the inability of the legislation to become enshrined in the Constitution in both 1978 and 1982 came despite the E.R.A. having the support of most of the political establishment from both parties at one time.

Perhaps equally significantly, as much as the fight for equality has continued and made giant leaps in the past 40 years, the defeat of the E.R.A. was in many ways the opening salvo of a backlash against women that in our own era saw Donald Trump elected, abortion rights attacked and suspended across the nation and Brett Kavanaugh tipping the scales on the SCOTUS.

Blows that put the once optimistic proclamation “equality of rights under the law shall not be denied or abridged by the United States or by any state on account of sex” under greater economic, cultural and systematic threat.

As efforts to revive the E.R.A. have now finally met the 38 states requirement under the U.S. Constitution and presumptive Democratic nominee Joe Biden has promised to pick a woman as his running mate, Mrs. America is not to be missed, as history, as drama and as the intersection of those duel currents.

So, check out my video review of Mrs. America above and check out the series itself for sure starting tomorrow – History rarely feels so current, trust me.