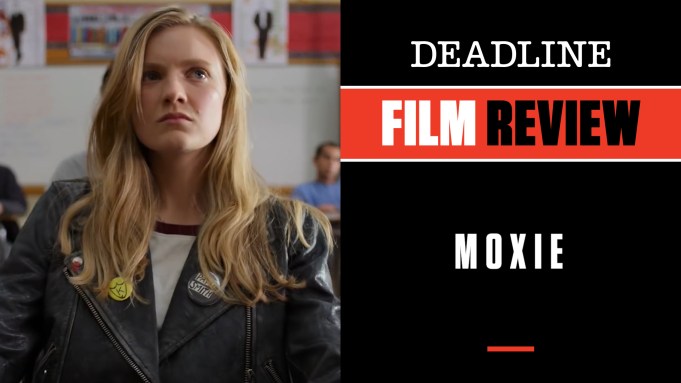 If her weekend gig trying to hold up Sunday’s Golden Globes landed with a thud, Amy Poehler has reason to celebrate success in another arena with her latest venture in the director’s chair for Netflix. Following up the likable Wine Country, she’s decided to venture into the choppy waters of a high school comedy, something her Globes co-host and SNL compatriot Tina Fey did so well, if more broadly, in Mean Girls, both in the movies and on Broadway. Moxie is less in your face, and grounded with believable and somewhat fractured young people weathering the societal landmines of just trying to get to graduation and then outta there.

That is the case for under-the-radar 16-year-old Vivian (Hadley Robinson), a shy student with dreams of college who tries to steer clear of the obnoxious class system in her high school, hunkering down with equally low-key BFF Claudia (Lauren Tsai). But with an annual cool kids- generated list looming that threatens to tag them with embarrassing attributes, Vivian is at her wits end, driven to action after football star and popular student Mitchell (Patrick Schwarzenegger) stands up for misogyny when the new student in class, a girl named Lucy (Alycia Pascual-Pena), dares to suggest The Great Gatsby is full of outdated ideas.

Inspired when she discovers her mother Lisa’s (Poehler) activist past as a riot grrrl, Vivian creates an undercover zine, Moxie!, remaining anonymous as its publisher but putting the likes of Mitchell and others of his ilk in a bad light, while sparking the seeds of revolution among other girls who begin to band together as the zine takes off. It is not all HS fun and games and sometimes goes into dark places like the later revelation of the rape of one student, and other pressing concerns. Meanwhile, Vivian gets a really nice and enlightened boyfriend Seth (Nico Hiraga), which is going well until a dinner with mom and her own budding boyfriend (Clark Gregg) turns dramatic when Vivian loses it, the pressure of her secret HS project taking its toll obviously.

With blaring Bikini Kill music, a sharp and socially bold attitude, plus an attempt to portray these kids as genuine human beings of one sort or another, Poehler’s film and its script from Tamara Chestna and Dylan Meyer (based on the YA novel by Jennifer Mathieu) navigates this world beautifully without ever resorting to stereotypes and making its protagonists thoroughly three dimensional.

Robinson is a real find, always believable as Vivian and someone you want to root for. Tsai and Pascual-Pena are engaging in their roles, as is the nice guy of Hiraga’s Seth. Poehler does fine in her more limited supporting role as Mom, but most importantly makes her cast shine as director here. Among them Schwarzenegger surprisingly belies his 27 years to make a convincing 17 year old, while Sabrina Haskett, Anjelika Washington and Josephine Langford all have nice moments too as fellow students. Ike Barinholtz doesn’t get to add much dimension to his stock portrayal of a beleaguered teacher, and Marcia Gay Harden is basically asked to remain clueless to what is going on in this principal’s school for most of the running time. Overall though this is very sweet and satisfying stuff in a genre in which it is hard to find fresh avenues. Somehow Moxie does it, and does it very memorably. Nice job Poehler.

Producers are Kim Lessing, Morgan Sackett and Poehler. It begins streaming on Netflix, increasingly the go-to place for this genre, on Wednesday.

Check out my video review above with scenes from the movie. Do you plan to see Moxie? Let us know what you think.