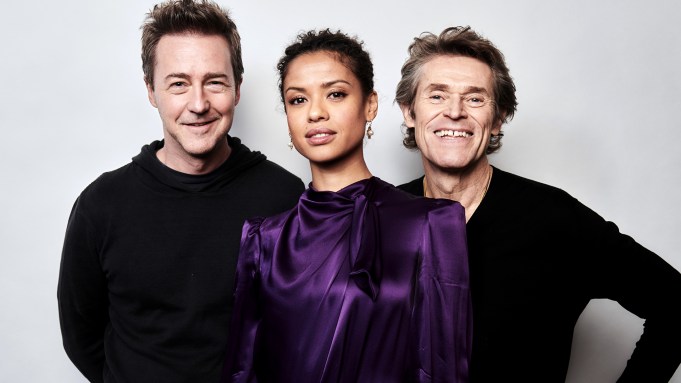 It took 20 years on and off for Edward Norton to get to the stage of the ninth annual Deadline’s The Contenders Los Angeles all day event at the DGA Theatre earlier this month in Hollywood.

In front of a packed house of Oscar and key guild voters, Norton, who wrote directed, produced and starred in his latest film Motherless Brooklyn, explained how he first read Jonathan Lethem’s novel as he was directing Keeping The Faith, the last film he helmed 20 years ago. It has been in his head ever since, and he talks about the daring move, with the author’s approval, to reset the time frame of the story about a gumshoe detective’s journey into the bowels of NYC corruption and crime from the book’s late 90’s era to 1957, where the noirish dialogue and characters might make more sense.

Co-star Willem Dafoe says he signed on because it was such a passion project with a great script and an almost Shakespearean relationship he had with the Trump-like builder played by Alec Baldwin. He liked the fact that the story lives at the divide of love and ambition. Co-star Gugu Mbatha-Raw’s character of Laura was not in the book. She loved that it was created for the movie and was not the typical femme fatale, but rather a woman who was actively involved in the ever-changing city and has a fascinating dynamic with Norton’s character of a dedicated detective trying to solve the mystery of the murder of his boss.

To watch our conversation just click on the link above.