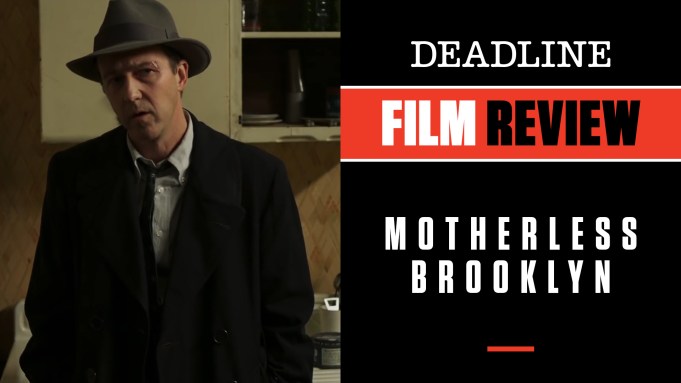 Edward Norton has wanted to bring Jonathan Lethem’s 1999 novel Motherless Brooklyn to the screen for the better part of two decades. It has taken that long, with a complex makeover of the book, for the resulting movie finally to come to fruition, but it is all well worth the wait.

For Norton, who not only stars but writes, directs and produces, it is a triumph of his will, as well as his talent in turning this into a noirish and exciting jazz-filled detective story that goes well beneath the surface to expose real truths about power and corruption at a time New York City was undergoing seismic change. The biggest swing for him was to change the year from 1999 to 1957, a more appropriate fit considering the gumshoe style of the characters. By doing so it also allowed him to really dive into the emerging new Gotham inherent during that time.

Plotwise, Norton plays Lionel Essrog, aka Brooklyn, part of an orphaned team of private investigators working for their mentor, Frank Minna (an effective Bruce Willis), who has brought them all together and who is on the trail of something big when he is murdered. This leaves his agency in the hands of Tony (Bobby Cannavale) and the other “orphans” including Lionel, Gil (Ethan Suplee) and Danny (Dallas Roberts), but it is Essrog, a young man afflicted by Tourettes syndrome and an obsessive-compulsive disorder, who really jumps into action, eventually uncovering much more than who killed Minna but also a network of corruption and gentrification in a city being transformed by kingpin Moses Randolph (Alec Baldwin). The real estate magnate and builder is transforming poor black neighborhoods by running them over in favor of bridges and buildings, in some not so thinly Trump-styled racism. Randolph is really a fictional version of famed NYC builder Robert Moses, and Norton’s script doesn’t really try to hide that fact.

Essrog follows the dots from Brooklyn to Harlem where he meets Laura Rose (Gugu Mbatha-Raw), who lives above a jazz club and fights daily battles against the likes of Randolph and his ilk. This leads Essrog into the power circles of the city in his quest to do justice for Minna. It also leads to the best music score of the year from Daniel Pemberton, smoky and jazzy riffs that are as much a character in the piece as any of the sensational cast Norton has assembled here.

The director does himself a lot of favors by taking on the rich leading role, playing a guy given to tics and head jerks and constantly blurting out things he perhaps shouldn’t. After getting into the rhythms of the character you completely succumb to this fine and risky performance, ,one of many triumphs for Norton with this picture. Baldwin has simply never been better than in this role, particularly in a telling monologue towards the end that is, for lack of a better word, chilling.  That the actor often plays Trump, a latter-day Randolph, on SNL is ironic but doesn’t get in the way of one of the year’s best acting turns. Willem Dafoe shows up in a few scenes as his disheveled and polar-opposite brother. Mbatha-Raw is wondrous as Laura Rose, and there’s fine work from Michael Kenneth Williams as a musician Essrog meets along the way; his music is supplied by none other than Wynton Marsalis, adding to the first-rate soundtrack that you won’t be able to get out of your head.  Every role is perfectly cast including Cherry Jones as Gabby Horowitz, Leslie Mann as Minna’s widow who turns the agency over to Tony, and Willis in a strong cameo that sets the plot in motion.

Just as important are the technical credits which are superb down the line, from Dick Pope’s moody cinematography, production designer Beth Mickle’s meticulous re-creation of NYC circa 1957 (a perfectly chosen year for the re-setting of the book, especially if you ever saw the beautiful black-and-white hues of that year’s Sweet Smell of Success), and the costumes of Amy Roth. Producers in addition to Norton are Michael Bederman, Bill Migliore, Daniel Nadler, Gigi Pritzker, Rachel Shane and Robert F. Smith. Warner Bros releases it on Friday.

Check out my video review with scenes from the film above. Do you plan to see Motherless Brooklyn? Let us know what you think.