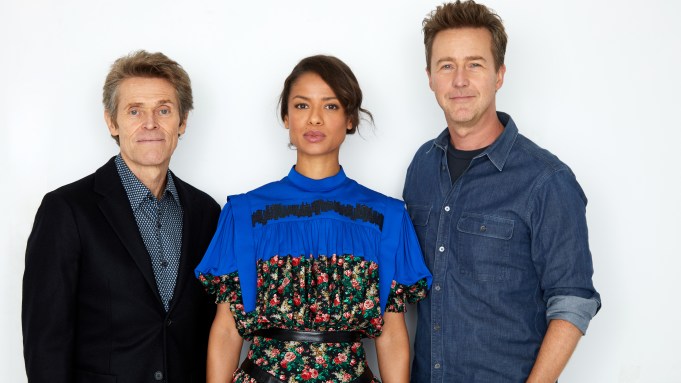 Edward Norton’s crime noir Motherless Brooklyn has been on a tear on the fall film festival circuit having premiered at Telluride, then TIFF and now tonight the New York Film Festival.

A feature adaptation of Jonathan Lethem’s 1999 novel, it’s Norton’s second directorial in 19 years, a long path due to “fits and starts” as the filmmaker-star explains.

“I read the book just before it came out, and made arrangements to get the rights to it. But at the time, I was about to make Fight Club, which I knew was going to be a big process, and then I was going to direct a film (Keeping the Faith),” Norton told us back at our TIFF studio with stars Willem Dafoe and Gugu Mbatha-Raw.

Motherless Brooklyn follows Lionel Essrog (Norton), a P.I. who battles Tourette’s Syndrome, who loses his boss Frank Minna (Bruce Willis) in a shooting sting. Lionel begins to delve into who murdered Minna and in Chinatown fashion comes up against city planners who are swallowing up ghetto properties as they expand their footprint. The original novel was set in modern times, but Norton decided to move it to the 1950s.

“The novel is a little bit postmodern—it sort of feels like ’50s gumshoes in modern Brooklyn. But Jonathan and I both felt like we didn’t want it to feel like The Blues Brothers, you know? So, we were like, ‘Let’s just put it in the era that the language of the book is written in,’ and then came this thought of, ‘Well, if we’re doing that, why don’t we maybe make the plot something to do with the deep social history and corruption that was taking place in New York in that era?’” explains Norton.

Dafoe plays Paul Randolph, a once prized city architect who becomes a source for Lionel, while Mbatha-Raw, without any great spoilers, becomes a romantic interest of Lionel’s.