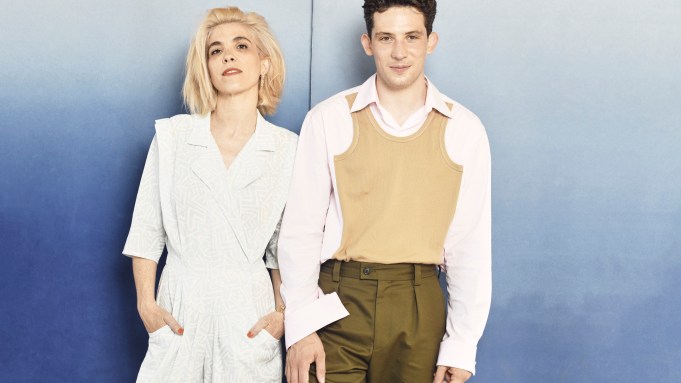 In the Eva Husson-directed Mothering Sunday, based on Graham Swift’s novella of the same name, Josh O’Connor is the high-born Paul Sheringham, embroiled in a passionate affair with Jane (Odessa Young), the maid of a neighboring couple (Olivia Colman and Colin Firth).

In Cannes for the film’s premiere, Husson and O’Connor discussed the film at Deadline’s Cannes studio.

Before signing on to direct, Husson had found the book profoundly moving, she said. “I first read it at the novel stage, and I remember I read it very, very quickly in one sitting. I closed it and I literally burst into tears for 20 minutes without any specific reason, but it just cracked something open and made me feel some sort of frequency.”

But she wondered if the script would be as powerful. Fortunately, Alice Birch (Lady Macbeth, Normal People) harnessed the power of the original novel in her screenplay. “I read Alice Birch’s script and the same thing happened, and I was like this is for me, this is weird, it feels like this story has managed to find its way to me in the universe.” Husson said.

Right away, she decided she wanted to direct it, especially given its contrast to what she was doing at that time. “I was shooting an action thingy that was very fun but not very intellectually stimulating. And suddenly you had this very, very delicate piece that talked about how hard it is to be an earthling, a human being. We all go through tragedies and it’s f—ing brutal. Wherever you are you suffer losses, death, disease, whatever social class you are from, and it had this elegance of treating everyone equally, and I thought that was superb.”

The film features full-frontal nudity for both O’Connor and Young as the couple spend an afternoon alone in his house. For Husson, the nudity was a vital element of the storytelling.

“It gives so much power to the character I feel, because the nudity’s not just about sex, it’s about intimacy. It’s much more than sex and I really tried to film that in this way,” she said. “Yes, they’re naked when they have sex, but that’s basically not when I film them the most naked, it’s when they talk.”

O’Connor has a scene where he has to dress from the top half down with total confidence, as Jane looks on. “What I loved about that is he is so comfortable with his space and he owns that world,” O’Connor said. “His power in life is through Jane, so when he enters that room it’s their space it’s their energy, there’s a vibrancy to it.”

For him, Paul’s mindset is both old-school British and painfully bereaved, since his two older brothers didn’t come home from the war. “You’re looking at a young man who is surrounded by almost his entire generation having been wiped out in the First World War, and I suppose the big theme for me was always survivor guilt and what the psychology of that was, and combining that with this British sense of stiff upper lip and repression of emotion.”

Having starred as Prince Charles in Netflix series The Crown, this film isn’t the first time O’Connor has embodied a traditional British mindset of repressed emotion. “To me it was kind of interesting, maybe accidentally, I’ve fallen on roles of men who are dealing with the difficulty of masculinity,” he said. Mothering Sunday is “a very beautiful example of someone who is unable to engage with how he’s actually feeling and puts up a front.”