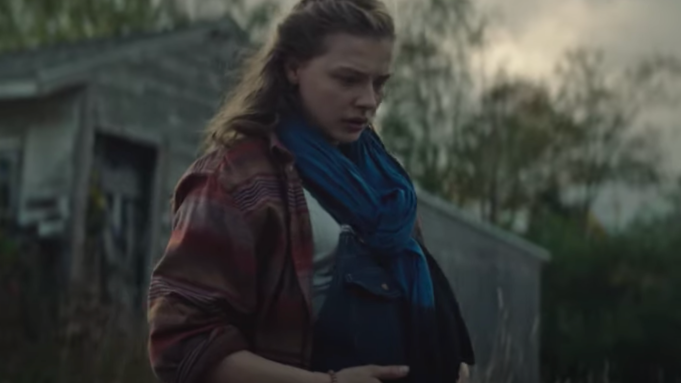 On Friday Hulu dropped the official trailer and key art for the sci-fi thriller.  Set in the near future, Mother/Android follows Georgia (Moretz) and her boyfriend Sam (Smith) through their treacherous journey of escape as their country is caught in an unexpected war with artificial intelligence. Days away from the arrival of their first child, they must face No Man’s Land—a stronghold of the android uprising—in hopes of reaching safety before giving birth.

The clip begins with Georgia and Sam waking to a peaceful morning in the woods, where something watches them just waiting to attack. Georgia recalls the fateful day when once subservient androids, made to look like regular people turned their back on the humans they served.

“Androids were a part of our everyday life and then one night everything changed,” she remembers.

The trailer follows the couple as they outrun the dangerous technological threats to make their way to a safe haven in Boston, where Georgia can give birth to her child. During their two-week trek to the East Coast they must survive the No Man’s Land.

The feature is the first directed by Project Power and The Batman scribe Mattson Tomlin.

The Batman and War for the Planet of the Apes director Matt Reeves produced through 6th & Idaho Productions with Adam Kassan and Rafi Crohn (Ordinary Joe, Away, Tales from the Loop), along with Miramax’s Bill Block (Halloween Kills, Uncle Frank), and Charles Miller (The Trial of the Chicago 7, Worth).

Mother/Android makes its Hulu premiere on Dec. 17. Watch the trailer above.