Continue to Deadline SKIP AD
You will be redirected back to your article in seconds
Skip to main content
April 22, 2021 4:00pm 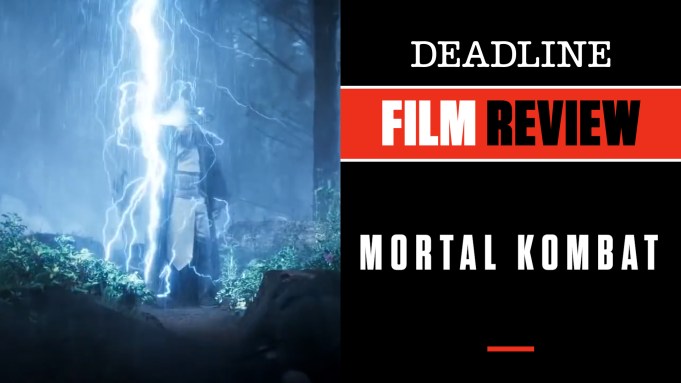 In an industry infatuated with sequels, reboots, remakes and basic regurgitation of anything that once worked, it was probably inevitable someone would get around to bringing back Mortal Kombat. Nostalgia for the blood-and-gore video game and its two mid-’90s film versions now brings us, wait for it, Mortal Kombat. Wait. Wasn’t that the name of the 1995 movie? Studios don’t care or even try to disguise their bid for box office. If it worked the first time, do it again and don’t even bother to change the name.

Hence, debuting feature director Simon McQuoid and writers Greg Russo and Dave Callaham (with “Story By” credit to Oren Uziel and Russo) take on the task of making this video game relevant after a quarter-century, and in the eyes of a new generation that might balk at liking the same thing dear old Dad used to play. Technological advances, and a requirement of diversity in casting, have made it easier for these filmmakers to come up with a new take that might just work despite concerns about the material’s age or lack of familiarity with some of its key tropes. Smartly, they have put a completely new character, Cole Young (Lewis Tan) at the center of the plot, and he cleverly represents all of us who might not have been devoted to the Mortal Kombat universe in the days of old.

Young is an MMA cage fighter, constantly beaten up but still in the ring in order to support his family and dreams. Hey, a job is a job. Unbeknownst to him, though, he also is a “chosen one,” thus the dragon marking on his body that signifies he has a higher calling. And it is going to come in handy. That’s because Outworld sorcerer Shang Tsung (Chin Han) is about to set loose vicious Sub-Zero (the character, not the refrigerator) the Cryomancer (Joe Taslim) aka Bi-Han on his prey and knock Young out of the game, and the picture.

Teaming with alluring and talented Sonya Blade (Jessica McNamee), who does not have the Mortal Kombat good ass-kicking seal of approval but isn’t daunted by anything, and the more experienced — and dragon-marked — Jax (Mechad Brooks), as well as brash Mercenary Kano (a wild Josh Lawson), Young is ready to be indoctrinated. Thus a visit to Lord Raiden’s (Tadanobu Asano) Earthrealm headquarters, where a team of warriors, including spiritual Liu Kang (Ludi Lin), put Young through the paces. Will our boy find his inner Arcana? Can you spell F-R-A-N-C-H-I-S-E restarter?

Plot-wise, it is all an excuse for non-stop action and hand-to-hand Kombat choreographed to an inch of its life, with each encounter almost like a number in a musical. The cast of fighters here, mixed with stunt doubles, is pretty damn impressive, and McQuoid has taken his marching orders to make this a sleep-proof vehicle for attention-span-challenged audiences. Tan is the perfect choice to anchor this all: His Cole Young is definitely of this generation, and that is a good thing indeed. Since the physical aspects of the role are as important as his acting talent, he passes muster on both.

McNamee and Brooks are also well cast and make all the right moves required in a film like this. Lawson is fun, Lin has his moments as loyal Liu Kang, and Tashim makes for an imposing opponent. Fire, ice, blood, guts, slicing, dicing and superior martial arts skills are the main attraction here, and fans (you know who you are) are in for a ride.

Producers are James Wan, Todd Garner, E. Bennett Walsh, and McQuoid. Warner Bros releases the New Line Cinema film in theaters Friday and on HBO Max for 30 days day-and-date. Check out my video review with scenes from the film at the link above.

Do you plan to see Mortal Kombat? Let us know what you think.